The latest in the Xperia family, the Sony Xperia Z, which was announced in the recently-concluded CES 2013, will go sale in the UK beginning in February 28 and Three has already started accepting pre-orders for the smartphone. 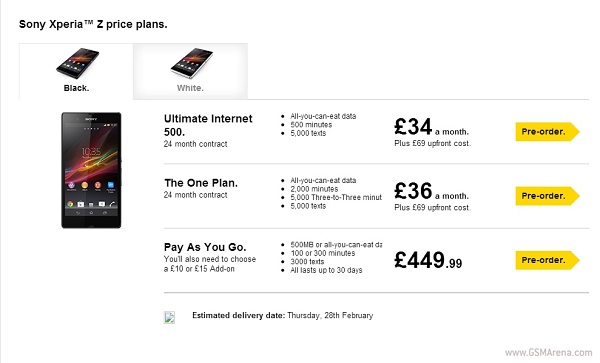 According to Three, Sony Xperia Z will be available for £34 a month with an upfront payment of £69, and the first 1000 pre-ordering customers will receive a pair of Sony MDR-1R Prestige headphones worth £299.

Three also offers the smartphone on a £36 per month plan with an upfront payment of £69 and 2 year contract.

Earlier, Sony's official online store in the UK had priced the smartphone at £529, but the carrier will be selling the waterproof device with a price tag of £449 on pay-as-you-go plans.

The Xperia Z smartphone will be available in Black and White color variants.

i m from PAKISTAN and i want this phone as soon as posible how can i get it.....

when will b launched in pakistan?????

Id be in those first 1000 customers, but what the hell should i do with my goddamn country?! We gona recieve that device in april...-.- fck sony that they didnt released it globally with those headsets...