Surprisingly, we found that the Sony Xperia ZL in an improvement over the Xperia Z in the screen department. Given that that the two are identical on paper (FullHD resolution on a 5" diagonal, 441ppi) and come from the same manufacturer we'd suggest this is due to unit variances, rather than Sony having designed a second panel of this type.

The TFT screen is backed by the Mobile BRAVIA Engine 2, which enhances contrast and sharpness, brings down noise and saturates colors to make them more pleasing to the eye. The reds in particular tend to really pop out.

The one area that Sony has improved here is contrast and we all know that that an upgrade was due here. However, the likes of the HTC One, LG optimus G Pro and HTC Butterfly still hold an advantage here, not to mention the Super AMOLED unit on the Samsung Galaxy S4, which has virtually infinite contrast.

Here's a closer look at the Xperia ZL's screen. 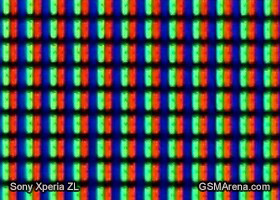 The Sony Xperia ZL and Xperia Z screens under a microscope


There are also the subjects of viewing angles. The Sony Xperia ZL display isn't terribly poor in that regard, but compared to just about every high-end smartphone out there it's clearly inferior. We've got used to the printed look that these ultra-wide viewing angles give, so we are not particularly fond of the treatment the Xperia ZL is giving us.

Some quote narrower viewing angles as an advantage as it helps your privacy in public places, but it certainly takes away some of the high-end vibe of the display.

Finally, the sunlight legibility on the Sony Xperia ZL is decent, if not quite up there with the best. You will normally be able to operate the smartphone trouble-free outdoors, but in brighter environments you might need to work a bit harder to find a proper angle.

The on-screen keys of the Sony Xperia ZL are always on except when you're viewing photos, watching video, browsing the web or playing a game. Even in these scenarios the keys easily come back up with a quick tap on the screen.

The grey strip at the bottom of the screen isn't the best background for the virtual controls. The Xperia ZL screen has a decent contrast but a black background would've still been a better choice.

The 2MP front-facing camera is capable of 1080p video recording and is placed in the bottom right corner. The location clearly favors landscape orientation when making video calls.

The left side of the phone features the microUSB port, which is exposed, unlike on the water-resistant Xperia Z.

On the right, you'll find the volume rocker near the top, the prominent power/lock button (placed dead center) and a two-step camera button.

We always appreciate a dedicated camera button on a phone, even more so when the camera is worth its salt. The shutter button on the Sony Xperia Zl has great overall feedback and distinct half-press. It's also light on the finger so you won't get blurry shots trying to push the button all the way down.

The top of the Sony Xperia ZL only features the 3.5 mm headphone jack.

The top of the phone

There's a lanyard eyelet in the bottom left corner of the Sony Xperia ZL.

Sony has done well to make the Xperia ZL quite comfortable to use. The controls are comfortably placed and very responsive.

The Sony Xperia ZL comes with a 2370mAh battery, which is 40mAh more than the Xperia Z offers. Somewhat surprisingly, it is officially rated to last for just 13 h of 3G talk time and up to 500 h of stand-by (vs 14h and 530h, respectively for the Xperia Z). Perhaps the different display unit used here is part of the explanation, but our dedicated battery test also found the Xperia ZL to have a slightly shorter endurance than the Xperia Z.

The Sony Xperia ZL managed an overall endurance score of 44h, which comes 4h short of the achievement of its sibling. That's still a decent score, suggesting that you will only need to charge the smartphone every other day if you an hour of talking, an hour of browsing and an hour of video playback per day. 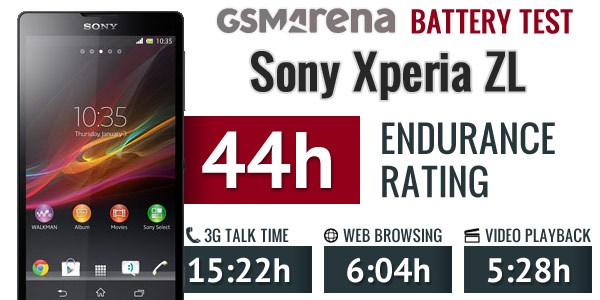 You should also keep in mind that the Sony Xperia ZL comes with the company's home-brewed Stamina mode, which has great effect on the stand-by efficiency and if you stick to it, you will get much better power autonomy.

You can learn more about our testing procedures here. If you are interested how these results compare to other tested devices, check out our battery life test result table.

You can find a more detailed look at the battery performance of the Sony Xperia Zl here.