Finally, the hidden LED below the display lights up with different color (similar with the image on the screen) every time you scroll through the pictures.

The Xperia ZL did a very good job with almost any file type and video codec we threw at it, including DivX and XviD, even MKV. The only exception was AC3 audio support.

Watching a video on the Xperia ZL

A video editing app called Movie Studio is bundled too. It lets you edit video, images, and audio together (both imported from files as well as recorded/taken by the device itself), using a variety of cool transitions. You can then export the resulting project into a video file that you can share using the Z's generous connectivity features (more on this below).

The Sony Xperia ZL also features an FM Radio aboard complete with RDS support. The app automatically seeks and adds bookmarks to stations in range, although you'll need to have a set of headphones attached to use as an antenna.

The Sony Xperia ZL performed excellently in the first part of our traditional audio quality test. The smartphone got great scores all over and garnished them with average volume levels, making up for one of the good performances we have seen.

There's some degradation when you plug in a pair of headphones, but things certainly aren't too bad. The stereo crosstalk rises very subtly and some distortion creeps in. Volume levels remain about average. A solid overall performance. 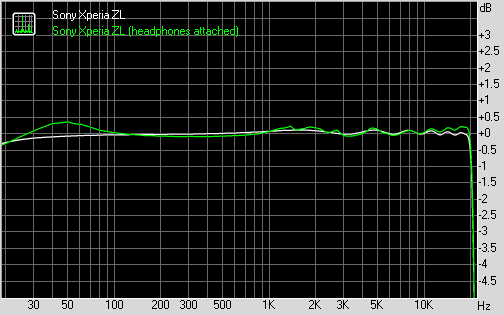