The design is... well, updated

For the longest time, Sony has been a fan of blocky designs and chunky bezels. The fact that it's used to launching not one but two flagships per year hasn't helped the perception that the company's phones have looked stale and barely distinguishable from one another. Its Omnibalance design language was interesting when it debuted many years ago, but in the meantime, the world has moved on to minimal bezels, phone fronts covered by as much screen as possible, and even rounded display corners.

The Xperia XZ2 is Sony's most modern-looking device yet, but that doesn't mean you'll be confused as to which manufacturer made it. Yes, the chassis has rounded corners now, but they're much less rounded than the competitors'. Yes, the screen now has the 18:9 aspect ratio, but its corners are not rounded. While this type of tall screen was all the rage in the Android world last year, in 2018 we're starting to see a lot of companies adopting the infamous notch at the top, which means even more elongated form factors for the display - 19:9 and 19.5:9 are now quite common. 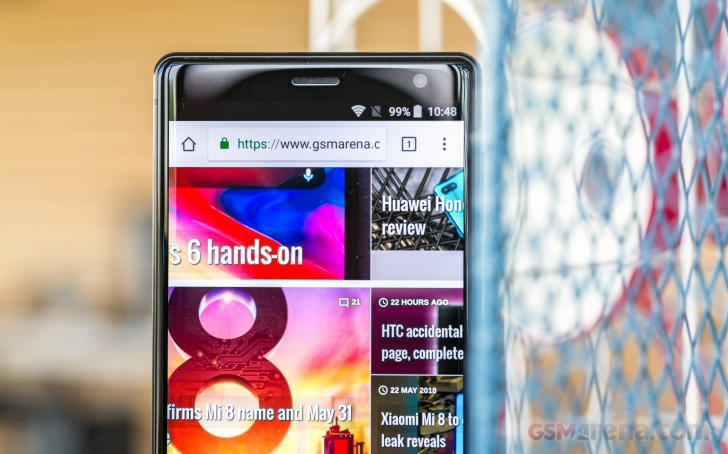 So from this point of view, the XZ2 still isn't on par with the latest trends. And then there are those bezels. Sure, they're the smallest of any Sony flagship to date, but that's a low bar to clear. Chinese companies left and right are releasing mid-rangers with 18:9 screens and smaller bezels than Sony's flagship. So if you want to spend a lot of money on a phone and would like it to look like every other upper-midrange or top of the line Android device on the market, this definitely isn't it.

If you want to stand out, however, in a sea of notches, very round corners, and thin phones, the XZ2 will help you do just that. It's thicker and heavier than you may expect, and its back isn't flat. This is something that might annoy you at first, but it turns out to be one of the phone's most unique features in terms of design. When you place it on its back on a table, it will give the impression that it's somehow floating a few millimeters above it. 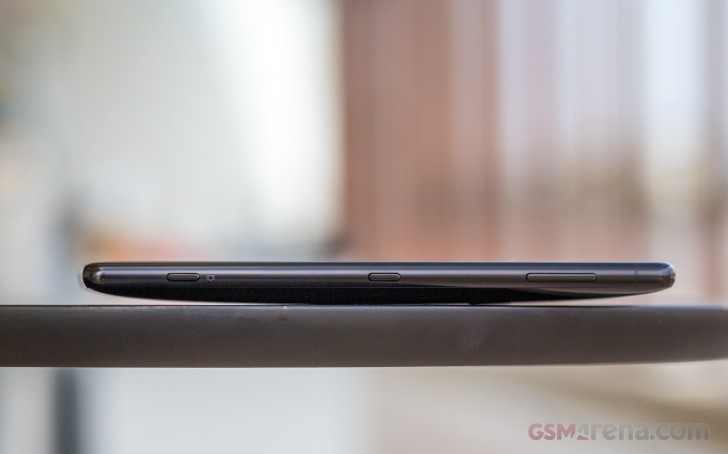 That's because of Sony's solution for the camera hump epidemic that's been haunting the mobile world for a long time. The part of the back where the camera is housed is thicker than the lower area and the glass tapers towards all four sides. So you get a decently thin handset where the metal frame is, but not if you count the bulge in the middle of the back. It's a unique design, for sure, but we're having mixed feelings about it.

Ergonomics suffer from the low position of the fingerprint sensor

The added thickness results in the XZ2 being easier to hold in one hand than its flat competitors, especially when making calls. Then again, in order not to have such a bulge near the top of the phone, the XZ2's camera sensor is in a location that's perfect for a fingerprint scanner. That's where your index finger naturally rests when you hold the handset, and you'll be very inclined to think that the camera is the fingerprint sensor, thus constantly adding smudges onto the lens. 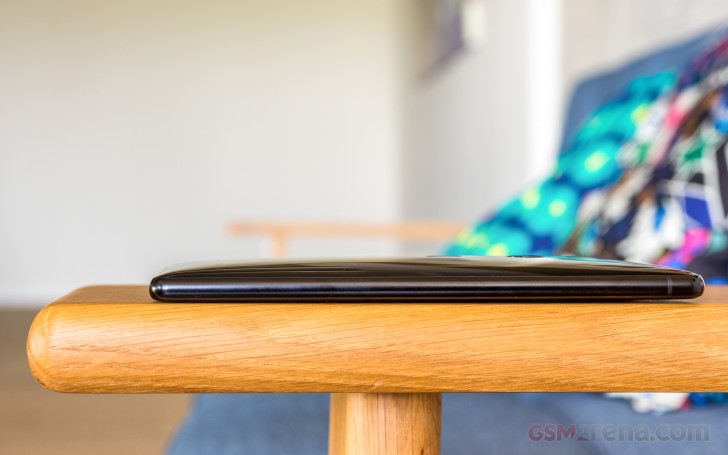 With the XZ2, Sony has moved on from a fingerprint scanner mounted on the side, inside the power button, and went with a very popular solution for Android devices - putting the biometric sensor on the rear. That's not controversial in any way, and will help the company in the US, where it can't legally sell phones with working side-mounted fingerprint sensors - a big issue for the past few years.

All of that said, the location of the fingerprint scanner on the XZ2 is just bad. There's no way around it. Samsung got a lot of flak about the placement of this sensor in the S8 family, and Sony can't be given a free pass here. Sure, we understand why it's not where the camera is - but it could still have been closer to the lens. Or maybe the company should have just placed the camera somewhere else, used the flat back + camera hump design (which all of its competitors have embraced), and called it a day. 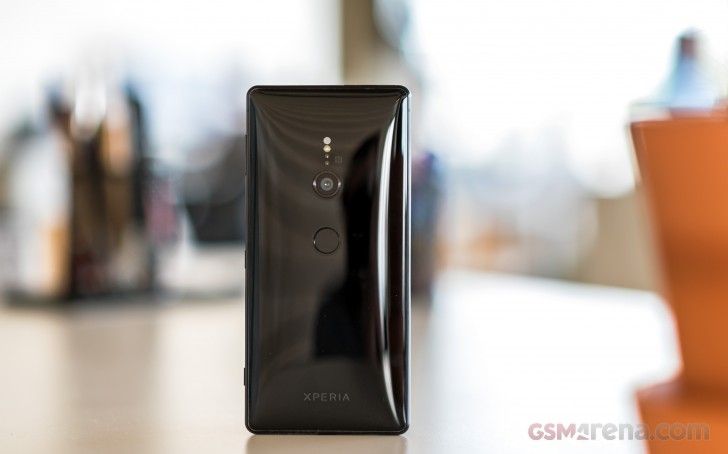 But no, Sony needs to be Sony - which sometimes means unique for the sake of uniqueness alone. You can call that an art form and appreciate it for what it is, but functionally and ergonomically this is a mess. Every single time you want to unlock the XZ2 you'll have to remember to bend your finger and place it much lower than what comes naturally.

Regarding the 3.5 mm headset jack, Sony went with the flow and removed it, emulating the moves of a lot of other companies. At least the XZ2, like past Sony flagships, still has a dedicated camera button. That comes in real handy for shooting, and also for starting the camera app (with a long press on it). This, however, means the right side of the phone is very crowded because that's where the volume rocker (top) and power button (middle) also live. In stark contrast, the left side is entirely empty.

An interesting design-related tidbit is the fact that you don't need a pin to eject the SIM tray (which also houses the microSD card, should you choose to add one of those). You can just use your nail to pull it out. This will definitely be appreciated by those who have a habit of losing those SIM eject pins that come inside the boxes of other smartphones. 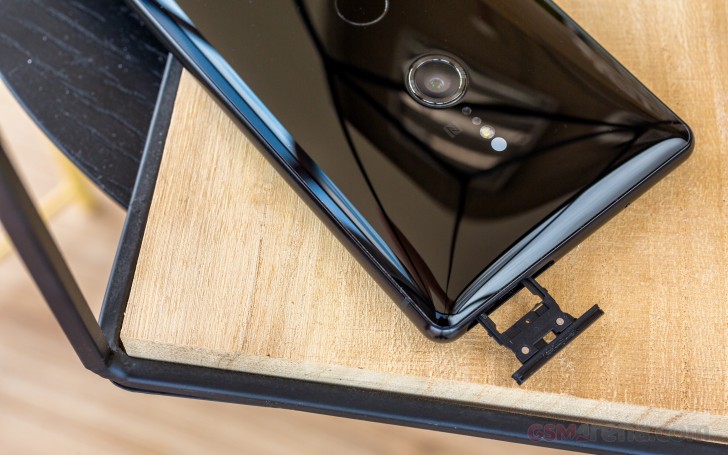 Excellent build quality, but slippery in the hand

The first word that comes to mind when you hold the XZ2 is: solid. That's how it feels, that's how it looks. The weight of the handset adds to this perception, but some might be put off by how heavy it is. The rounded metal frame that meets the glass on both sides is a nice touch, slippery as it may be (we've handled worse, though). 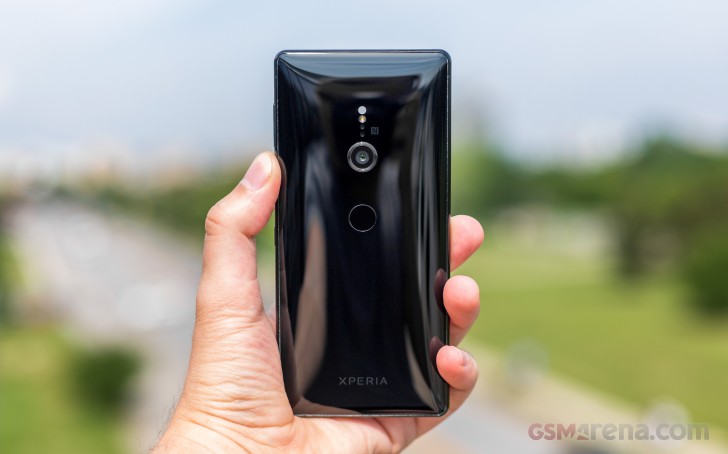 Because of how slippery the glass on the back is, taking the XZ2 out of a pocket, especially if you try and not smudge the rear camera lens while you're doing it, is a task that could become quite stressful. Additionally, fingerprints do accumulate like crazy on the back, so for OCD sufferers a microfiber cloth is a must carry item.

One word of advice - don't place the XZ2 on its back on a couch or any surface that isn't perfectly straight. It will magically start moving on its own in no time, and you might come back to find it on the floor.