Sony is rumored to finally cut the bezels of its premier smartphones next year, adhering to the biggest trend of 2017 in the mobile world. Better late than never, then. The company's first flagship 'bezelless' offering is allegedly going to have the model number H8541, and its specs have been leaked today.

Through a spec sheet that's claimed to be authentic we get to know the upcoming device a little bit better. It will apparently have a 5.7" 4K HDR touchscreen with Gorilla Glass 5 on top, and a 3,420 mAh battery. 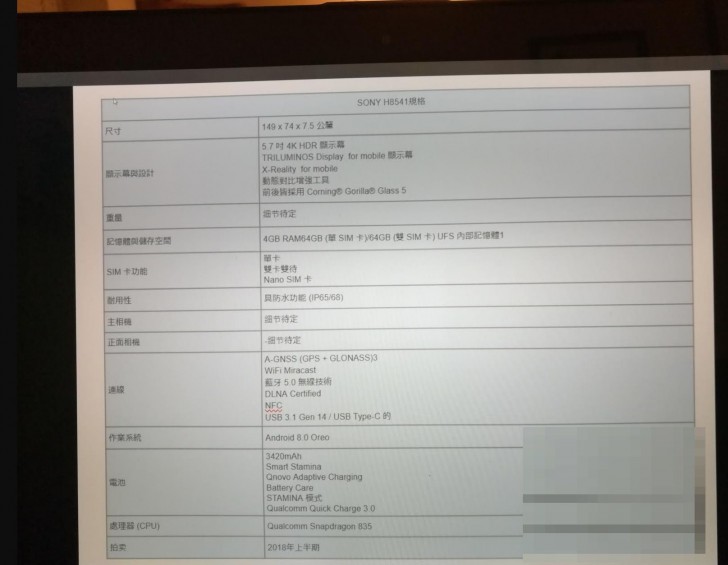 Interestingly, the H8541 is said to be powered by Qualcomm's Snapdragon 835, which is this year's top shelf chipset but will be superseded by the 845 in 2018. The reason for Sony going with the older SoC probably has something to do with timing: the H8541 is rumored to be unveiled at MWC in February, and the Snapdragon 845 might only be available to smartphone makers that aren't Samsung a few months later. A reprise of last year's situation on this front has long been speculated, and it looks like Sony will choose to go with the 2017 chip instead of changing its release schedule.

Remember when everyone was hyping up the 'world's thinnest smartphone', making successive generation thinner and thinner? Until in 2013 we learned that you'd end up bending them - not to mention poor battery life? Yes. This is the exact same thing. ...

I think someone in Sony needs to leave the company!

he uses xzs. so xzs must be very slippery and fragile. LOL better buy xiaomi or oppo or oneplus or the other china brands