Alleged specs of the yet to be announced Motorola Moto E leaked out. When launched, the smartphone will slot below the Moto G in the manufacturer’s product range.

Leaked specs of the Moto E include a 1.2GHz dual-core CPU, 1GB of RAM, and 4GB of built-in memory. The latter will likely be further expandable, as 4GB will not get you anywhere in terms of available storage these days. 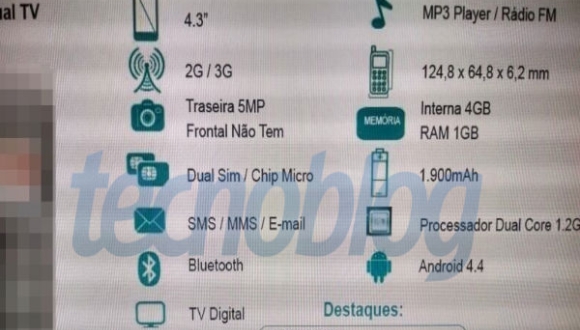 The display of the Moto E is a 4.3" unit with unknown resolution (we would bet on a sub-720p screen). A 5MP main camera, front-facing snapper, 1,900mAh battery, FM radio, and Android 4.4 KitKat round up the list of known specifications.

The Moto E is tipped to arrive in the coming weeks on the Mexican wireless carrier Telcel with the model number XT1021. Its price tag is certain to be lower than that of the Moto G.

If my portuguese isn't that rusty "nao tem", translates to "don't have", in reference to the front camera. That' s currently my only issue with the phone, I brought the Moto G from overseas for my father, but since customs in my c...

That last point is simply not true. Plenty of people own their own phones outright.