This lines up with our previous report showing screenshots from the Galaxy S5 with both regular and on-screen buttons and those suggesting there will be two versions of the Samsung flagship. 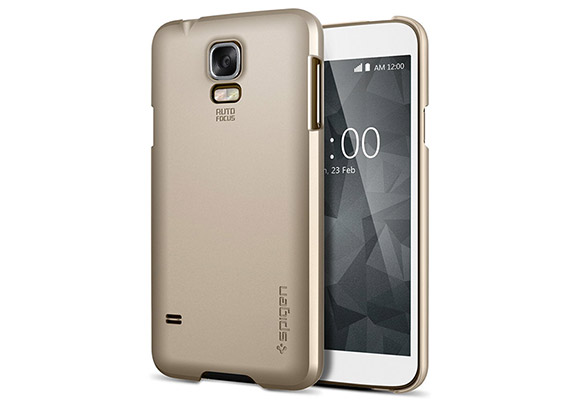 As you can spot on the image below, there's no physical Home button to be seen. There certainly is a chance that there's a capacitive key that's not lit up, but again that would make it different from the hardware key on the other version.It's also possible for this to be a finger-scanning home button, we'll have to wait and see.

The Samsung Galaxy S5 has no physical Home key

Spigen has a history of leaking unannounced phones on their case listings. This has happened before with the Nexus 5 and the Samsung Galaxy Note 3 and all were the real deal.

The Samsung Galaxy S5 variant with a physical Home button

Other than this, both models have a dual-LED flash below the camera, which is rumored to be either 16MP or 21MP. The volume rocker is positioned on the left, while the Power/Lock key is on the opposite side. At the bottom back of the phone, there's the speaker grille.

All of the cases are listed to be in stock on April 15, if this is any indication on when the phone will be available for purchase. Monday, February 24 can't arrive fast enough for the Unpacked 5 event at the MWC to take place.

That home screen wallpaper reminds me of Micromax Canvas Turbo ..... am i tripping ?

This can't be true, those bezels are much bigger than my S3! :/