Sony scheduled its IFA event for tomorrow but we've already seen one big Xperia Z3 Compact leak and now its big bro is out in the open as well. A photo of a Sony Xperia Z3 with a sticker on it reveals all the juicy specs of the new waterproof flagship. 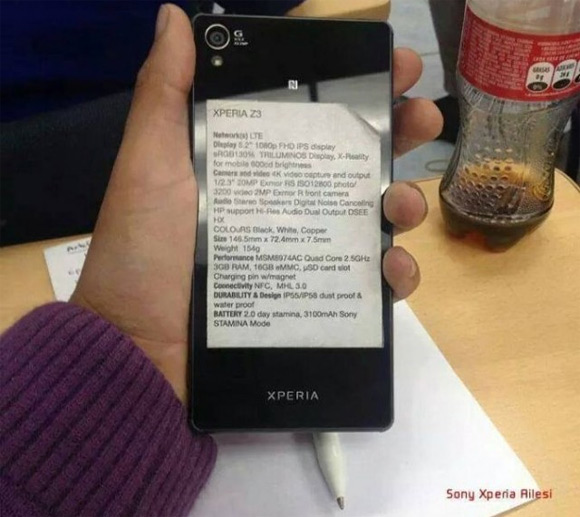 The screen is still a 5.2" IPS unit with 1080p resolution and Sony's Triluminos display tech. It promises 130% coverage of the sRGB standard and 600 nits of brightness. We measured the Xperia Z2 screen at 488 nits.

The camera uses a 1/2.3" Exmor RS sensor with 20MP resolution and 2160p video capture. The camera can boost the ISO to 12,800, double what the Xperia Z2 camera manages. For video ISO will top out at 3,200. This could make it the low-light shooting champ or it could create a sea of noise, we'll have to find out for ourselves.

The list improvements goes on. The Xperia Z3 will be powered by a Snapdragon 801 MSM8974AC chipset (2.5GHz CPU, up from 2.3GHz). It will have thinner body (7.5mm vs. 8.2mm) and come in Black, White and Copper (the Z3 Compact leak showed more colors than that).

The phone will keep the stereo speakers and support for noise-cancelling headphones. The battery capacity is practically the same (3,100mAh, down 100mAh).

In related news, Sony pulled out of the US market after disappointing sales but Spring might bring Xperias back. The carrier has recently been shaking up its market strategy, so has Sony for that matter.

By the by, we're also expecting a tablet from Sony tomorrow (besides the two Xperia phones), a smartwatch, a smartband and maybe more on its PlayStation 4 VR headset.

dude if youre aware, there is a qoute from apples late CEO saying "that apples is inspired by sony" in a conference.

I need 6 inches or more. I currently have the Z Ultra at 6.4 inches. 5.2 is a joke. They are chasing iPhone to the bottom.