Android's share of the Indian smartphone OS market jumped to a whopping 97.1% in Q2 2016, according to market research firm Strategy Analytics. The figure stood at 90% in the year-ago quarter. 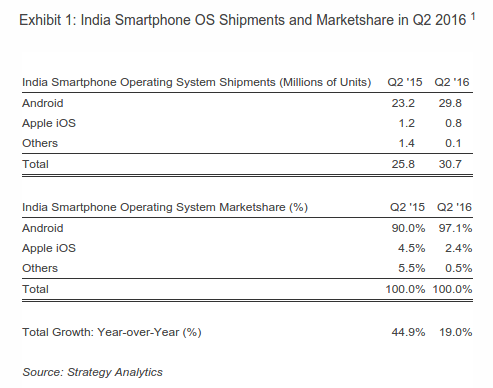 "Android maintained first position across India with a record 97 percent OS share for the quarter, up from 90 percent a year ago. Android dominates the India smartphone market and looks unbeatable right now, due to its deep portfolio of hardware partners, extensive distribution channels, and a wide range of low-cost apps like Gmail."

Meanwhile, iOS' share of the Indian smartphone OS market almost halved, coming down to 2.4% from 4.5%. The Cupertino-based company only managed to ship 0.8 million iPhones in the country during last quarter.

"Apples smartphone marketshare has halved from 4 percent to just 2 percent in India during the past year. Apple iOS will need to reduce iPhone pricing to cheaper levels, attract more operator subsidies and enlarge its retail presence through Apple stores or online channels if it wants to regrow significantly in the future."

Slowly and steadily Android is making it to the top by capturing the highest market share worldwide which is much higher then any other platform. But when it comes to revenue generation there has been no competition to iOS. Apple has been consecutive...

Yes that's when real fun starts I agree, but for different reason. At 95% market share, Android will put inexorable pressure on IOS and firework really begins at Apple HQ! No third coming of Jobs to save Apple's bacon this time around though!!

The real fun will start when Google will be forced to serve 90%-95% market with their free OS with security holes.....At some point it will be orphaned like you have all Chinese mobiles unusable after few months and you do not get Software Upgrades.