Strategy Analytics: Apple could soon become No. 1 in China

Apple might have lost its world's top smartphone-maker crown to Samsung, but it looks like the Cupertino-based company could soon make it to the No. 1 spot in China, which is the world's largest smartphone market. 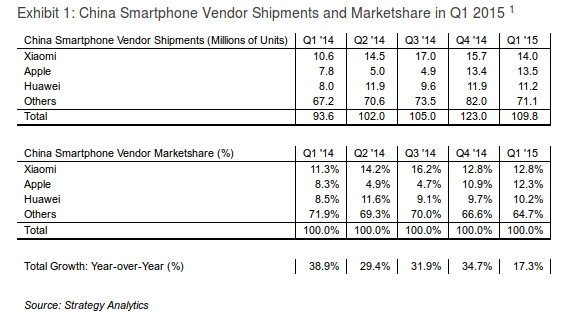 According to a report from market research firm Strategy Analytics, Apple shipped 13.5 million iPhones in China during Q1 2015, up from 7.8 million it shipped in the year-ago quarter. With 12 percent market share in the quarter, the iPhone-maker held on to its No. 2 ranking in the Asian country.

On the other hand Xiaomi, which is the largest smartphone OEM in China, shipped a total of 14 million handsets in the quarter, claiming 12.8% market share.

According to Neil Mawston, Executive Director at Strategy Analytics, "Xiaomi has maintained the number one smartphone position in China for three quarters in a row, due to solid demand for its popular Redmi models. However, Xiaomi's rapid growth is now coming to an end, and it has delivered negative sequential growth in China for the past two quarters."

Meanwhile, Apple "has narrowed the marketshare gap with Xiaomi to less than one percent. Apple's new iPhone 6 and 6 Plus models are proving wildly popular with Chinese consumers and, if current trends continue, Apple could become China's largest smartphone vendor in the second half of this year," he said.

Another point worth noting here is that Samsung, which is now the world's leading smartphone vendor, did not even rank in the top three, something which has happened for the first time since Q4, 2011.

Silly "hatred" of Apple stuff would explain it, and possibly why my comment got deleted.

Interesting I cannot find any product information about Huawei's recently launched round smart watch on their Chinese website but can on their international English site. Feel free to provide the link.