Oppo may have plans to change it, but at this point Xiaomi has overtaken the BKK subsidiary in Q1. The data comes from Strategy Analytics which released its latest report on global smartphone shipments.

Samsung and Apple remain the top two players, but the market as a whole shrunk by 2.4%. 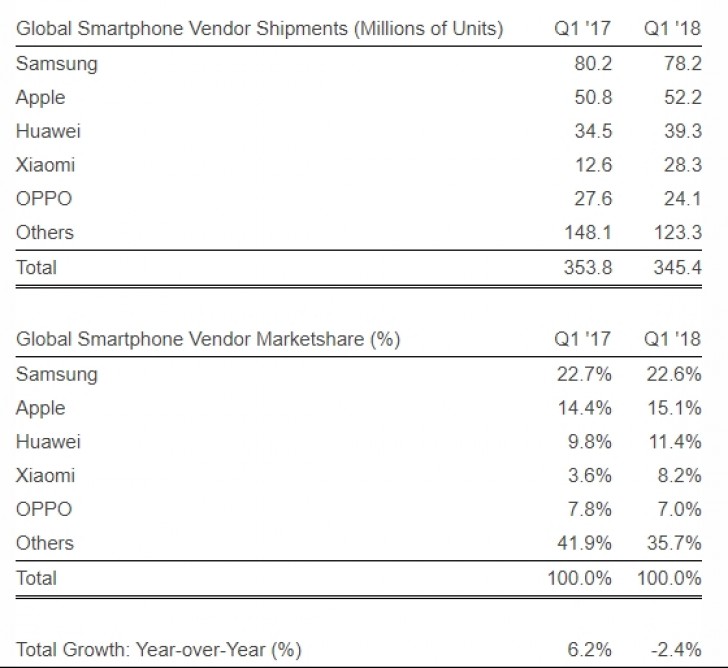 Samsung shipped 78.2 million phones between January and March, capturing 22.6% of the market, compared to a very similar 22.7% share last year. Apple stays at second with a slight increase from 50.8 million to 52.2 million shipments, which translates to a higher market share of 15.1%.

Huawei was denied access to the US market but still managed to ship 39.3 million units in Q1, grabbing 11.2% of the market. The most prominent increase is from Xiaomi which doubled its shipments, surpassing Oppo and pushing vivo out of the Top 5.

After shipping “just” 12.6 million phones in Q1 2017, a year later the Mi company reached 28.3 million units and is on course to completing its target of 100 million shipments by the end of the year.

The global smartphone market keeps edging out smaller manufacturers. In the past quarter two out of three phones, were from a Top 5 company.

Xiaomi can do it. We wish you achieve target by Dec18

So why don't they buy it?

Xiaomi makes phones with great specs, vivid FLAT SCREENS (that do not suffer from annoying glares issue), and are decently priced. Way to go, Xiaomi! We wish you lots of luck.