Symbian^3 is due this year, in fact we've heard that S^3 devices should arrive in Q3, but we hadn't seen a live demo of it. One just hit the Internet - it runs on a laptop rather than a phone but still, the UI is manipulated in real time in front of a live audience.

It's important to note that Symbian^3 is meant to catch up to the users expectations of what a modern smartphone should be able to do, we have to wait till Symbian^4 to get to the innovative part. We weren't mightily impressed by the mockup videos of S^4 though. 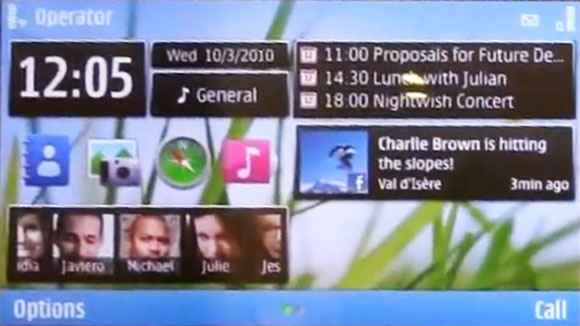 The homescreen has been revamped to make it much more widget friendly - the way to add new widgets, rearrange them, adding new homescreens, that kind of thing. The task manager has been redesigned too.

Nokia emphasizes performance (up to three times faster in the graphics department they say) and multitasking. And not that trick multitasking where the app is frozen, no. Apps in the background continue to run. We wonder who that jab was aimed at.

Multitouch is finally making its way to the Symbian platform - both on capacitive and resistive displays.

The demo is running on a laptop but it looks like the real deal and not a mockup. The "phone" on the screen however is probably just a generic image of a phone rather than a future device.

If Nokia built the type of device with full PC functionality and be able to communicate it with local Tvs and projectors its literally making that device we were all dreaming of. Carry it into your pocket, take it out and expand the screen everything...

is there any developement goin on for N97 firmware or software???it realy needs some major upgrades...i own it n i know it

Symbian as an operating system is very buggy (putting it politely). One of the biggest bugbears of it is that constantly it stops you sending texts. This is across all manufacturers and only reinstalling/updating the software will sort it. I work in ...