The T-Mobile G1 has a very comfortable and capable music player. The player supports the main file formats, such as MP3, WAV, WMA, and AAC and is among the exceptions that can be set to run in the background. One of its major drawbacks is the lack of equalizer presets or other features like stereo widening, enhanced bass or visualizations.

Another let down concerning music is there is no standard 3.5mm audio jack on the G1 and they didn't even provide a miniUSB to 3.5mm adapter in the retail package. Don't worry though, as you can easily snatch one online for several bucks. As the G1 is manufactured by HTC all miniUSB adapters made for HTC will do here as well.

The main display has four big icons for artists, albums, songs, and playlists. At the very bottom of the screen is the now playing section with the author and the track name. The play icon is not active, i.e. it does not start or pause the track but serves as a shortcut to the track itself.

The simple but capable music player

The artists section lists the performers in the library. Indication of the number of albums and tracks are right under the artist's name. The specific tree structure allows you to see the different albums and the tracks in them and album art is supported.

If you select a track it starts playing immediately. On the right side of the album label there are shortcuts for now playing list, shuffle and repeat. Each time you press a key a small tooltip gets displayed over the play key to indicate what action has been taken. On top of this there are the contextual menus where you get additional access and features such as library, add to playlists, use as a ringtone, delete, etc.

Albums, Songs and Playlist icons in the main player menu are also at hand if you prefer them for quicker access to your music files.

Finally, the gradual-typing search option is for people who don't remember the whole name of the track or simply want to quickly get to it. The good news is that it works with any part of the song's name.

Searching a track by gradual typing and the corresponding results

The T-Mobile G1 achieved about average scores on most readings in our traditional audio quality test. The handset has tolerable audio output which considering the high price tag is hardly a great achivement. It has cut-off bass frequencies, probably due to some kind of high-pass filter meant to improve sound on small size headphones. The distortion levels are passable but not great by any means.

On the positive side the T-Mobile G1 has good dynamic range, noise level and low stereo crosstalk. A comparison to the Apple iPhone is by no means favorable to the G1 but most WinMo devices like the HTC Touch Pro in our chart are not too far ahead. And here go the results so you can see for yourselves. 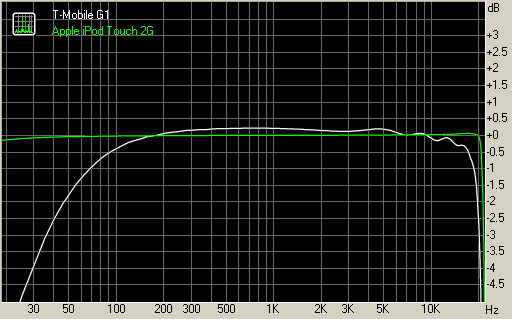 Where is the video player?

The G1 is said to run one of the most advanced OSes around, and yet it doesn't have any video player preinstalled. Having in mind it's the first device with the new OS, and since there are already some free video players that can be downloaded off the Android Market, we will pass that with a smile. We really hope the next device powered by Andorid will have that fixed.

We were somewhat surprised to find out that there is a sneaky way to play 3gp clips without any installed player. What you need is email a 3gp video to your Gmail account and then open it by using the "Preview" option in your email client.

As far as we could tell, the G1 only supports the H.263 codec. This means that you will be able to play 3GP and MPEG4 clips that are encoded with the codec, but nothing else. We are not quite sure how this will turn out, but we really hope developers will find a way to extend the video support a little further.

Here's a third-party video player by by Jeff Hamilton we downloaded additionaly. It supports auto rotate, has a simple but efficient user interface and is quite stable.