Aside from new entry-level Alcatel smartphones, TCL has also unveiled its own self-branded smartphones, and they are in a more premium segment. The TCL 10 series consists of the TCL 10 5G, the 10 Pro, and 10L. These smartphones are coming to global markets later this year with planned availability in North America in Q2 of this year.

Our TCL-branded smartphones and mobile devices will be an important focal point for the larger TCL ecosystem moving forward, and with these powerful and accessible devices coming this year, we feel TCL is well-prepared to compete in any market around the world. – Shane Lee, General Manager, Global Product Center at TCL Communications.

The devices all feature displays made by TCL’s display division, TCL CSOT, with the company’s NXTVISION display optimization technology. While the 10 5G and 10L feature ‘flat’ displays, the 10 Pro is the only one to come with an edge AMOLED screen.

The TCL 10 5G is the company’s first 5G-smartphone and will be powered by one of Qualcomm’s latest Snapdragon 7-Series chipsets (presumably the Snapdragon 765G). It features a large display with punch-hole camera, and a reflective glass back with rear-mounted fingerprint scanner. Like the other two 10-Series smartphones, the 10 5G has a quad-camera setup and dual LED flash modules. 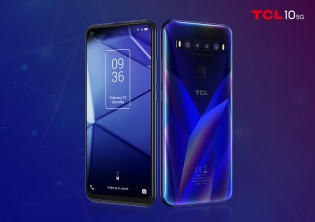 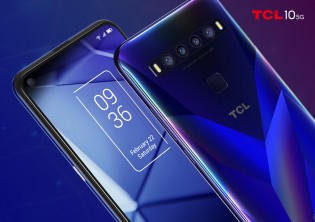 We don’t know about each camera’s individual specs, but thanks to the renders, we know it at least has a 64MP main camera.

The TCL 10 Pro looks similar to the 10 5G but with a different kind of display. It’s an edge AMOLED screen with a notch cut-out for the selfie camera. Instead of a reflective holographic design, the 10 Pro’s rear design is reminiscent of the OnePlus 7 Pro’s ‘glowy’ patterns.

The 10 Pro has two single-LED flash modules, but the 10 5G has two dual-flash modules. This one also has a 64MP main camera as per the text below the cameras. Unlike the other two variants, the 10 Pro has an in-display fingerprint scanner.

The 10L is the lineup’s base model. This one has a quad-camera setup with a 48MP main shooter and a rear-mounted fingerprint scanner. Like the 10 5G, this one also has a punch-hole display for the selfie camera and it features a diagonal reflective rear glass design.

TCL is not offering any specifications of its new lineup just yet. Though it is unveiling the 10-series at CES, the phone maker plans to fully launch the product in late-February during Mobile World Congress in Barcelona.

companies need to start with something and having something that already exists but a bad design is way easier to fix and implement new designs and new parameters. Alcatel may be subpar but having the tech for 4/6gb ram and 64/128 GB storage phones w...

Seriously, how much different can you design a quad camera?