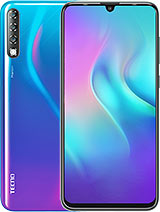 aknsreddy, 12 Jul 2019Small battery. Will fail miserably. After 1 month using,I found battery is preety good,but this phone is not for heavy gamer

San, 14 Jul 2019I am just worried about the battery is not proportional to its specification, and don't think ... moreAfter 15 days of using,I found battery is good enough but no fast charge supported

With these specifications, I am per

Tecno has 5 phones to be uploaded here, what's the hold up????? Spark 3 all versions. Pouvoir 3 air, & standard version..... Am surprised Phantom 9 was uploaded but others came before it?!!

why is the battery of phantom 9 has 3500ahms compared to camon x 3750? it should have a bigger capacity

Don don, 24 Jul 2019Tecno, Tecno, Tecno! Why? Why? Do u have to copy Samsung and apple u copied apple with ur Cano... moreCheck the essential phones none of the phones you listed is a sole owner to any of the designs. Tecno is a innovating brand willing to give it's customers a handful of quality and yet affordable. Thumps up for the phantom 9 it's a one of its kind.

Bukech, 26 Jul 2019Nope, Tecno phones are underatedYes please it would work perfectly well in Europe. It has a better bandwidth than Tecno pouvoir 2 which is currently used by a friend of mine in Germany thanks.

how effective is tecno phantom 9.

Captain yao, 26 Jul 2019Please increase RAM to 8 at least.Anything over 4 is overkill anyway so why? If anything bigger battery please! :D

Please increase RAM to 8 at least.

The only difference is in design and software, performance wise I see no different.

Earlier Tecno Phantom where regarded as flagships because of premium processors they used by then the x series, but now midrange only.

Jay, 12 Jul 2019Is the phantom works in europe ? Nope, Tecno phones are underated

Nocopy, 16 Jul 2019Looks like a huwawei copycatThere's a lot of interdependence in phone market actually every company can copy, the up coming iPhone 11 and google pixel 4 gonna have that square camera triple camera layout that previously first appeared with Huawei mate 20 pro

Jozydblur, 16 Jul 2019Still waiting for the day Tecno will start using Qualcomm SoC Tecno uses MediaTek just to keep its products affordable, MediaTek too had premium processors X series but they dropped them due to there low reputation but they where good.

Total of 281 user reviews and opinions for Tecno Phantom 9.
ADVERTISEMENTS