Exclusive: Here's our first look at the Tecno Spark 7 launching next week

Tecno introduced the Spark 6 last September with a Helio G70 SoC, and it will follow up with its successor dubbed Tecno Spark 7 next week in India. A reliable source sent us an image of the Spark 7, which reveals the smartphone will pack a waterdrop notch display. Its predecessor came with a 6.8" HD+ punch hole screen, and it remains to be seen if there's any change in the display diagonal and resolution on the Spark 7.

The Tecno Spark 7 has a textured back, with the big Spark branding on the bottom-left. The picture hides the upper portion of the panel, so we can't tell how many rear cameras the Spark 7 will come with. However, the Spark 6 came with a 16MP triple camera, and some upgrades are to be expected. The Spark 7 will likely also sport a rear-mounted fingerprint scanner like its predecessor. 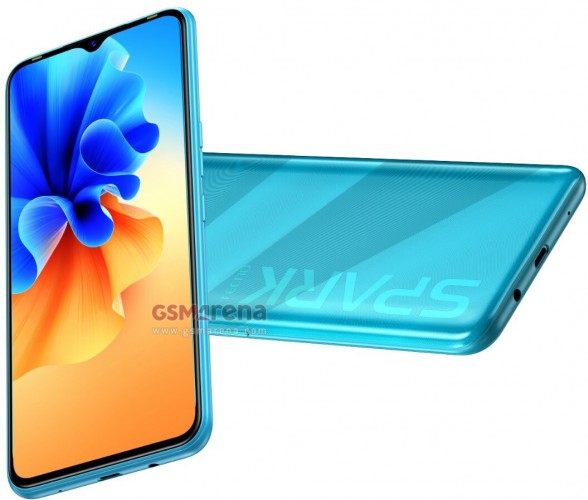 Previously Tecno told us that the Spark 7 - which will be offered in Green, Black, and Blue colors - will come with video features such as Time-lapse Videos, Video Bokeh, and Slo-Mo video recording. The company also said that the Spark 7 series smartphone will feature Time-lapse on both the front and rear cameras, with speed settings ranging from 15x to 5400x.

The Spark 7 should pack at least a 5,000 mAh battery like the Spark 6, and the picture reveals a USB-C port, a 3.5mm headphone jack, and a microphone placed at the bottom. Oddly enough, we don't see a speaker grille here, and neither is it visible in the lower half portion of its back cover, meaning it could be placed on the top-side of the smartphone or alongside the rear cameras. But we don't remember when was the last time a smartphone was launched with a speaker positioned like that.

We don't have the full specs sheet of the Tecno Spark 7 yet, but you can expect to hear more about the smartphone before its official unveiling.

Hmmmmm wow that's good to know, it will be my next phone by the grace of God. Well done Tecno.