The 8 megapixel Samsung i8910 records HD video, ready to roll

Samsung i8910 is the new addition to the long line of Samsung phones that leaked these last two weeks. This time we're talking something big though - both in size and in features. The i8910 will be the first phone to record HD video. It's also packs a huge touchscreen and runs on the Symbian S60 OS 5th edition (think Nokia N97).

Samsung i8910 seems to be one of the juiciest phones to be announced at this MWC. Its most conspicuous feature is the huge touchscreen, which looks similar to the 3.8-incher on HTC Touch HD.

As far as rumors go Samsung i8910 sports an 8 megapixel camera with HD video recording (1280 x 720 pixels), GPS and Wi-Fi connectivity, HDMI output and a 3.5mm audio jack plus DivX and DNLA certification. Considering the front barely noticeable camera, we might be sure of the 3G support. 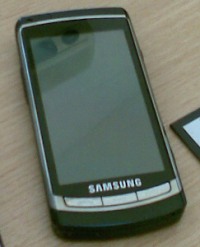 The Samsung i8910 will come in 8GB and 16GB versions much like the Samsung Omnia it comes to upgrade.

Currently there's no info about the OS, but some sources quote it as the latest Symbian S60 5th edition, used in Nokia 5800 XpressMusic and Nokia N97.

We just can't wait to get our hands on one of these babies.

wt is powerdicglobal???? how can i fix it plz because it appeared on my omnia i8910 hd nimages in my gallery and i don't know wt to do?? i need help plz

does anybody know when it will be released ??