The Galaxy Note 4 with Exynos chipset has an ISOCELL camera

Samsung was strangely vague about the image sensor in the Galaxy Note 4. It bragged about its in-house ISOCELL sensor in the Galaxy S5, but not a peep about who made the Note's sensor. The deal was resolved with the simplest solution – an eyes on test, which found a Sony IMX240 sensor.

Or was it? New evidence suggests there's more than a difference in chipsets between the two Galaxy Note 4 versions – the Snapdragon 805 one and the Exynos 5433 one. Using a hidden service menu the camera firmware version was checked to find that the two different models report two different things. 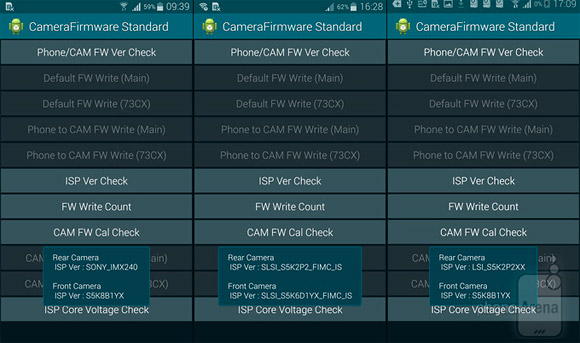 The Exynos-based Note 4 version string is very similar to what the Galaxy S5 reports, while the Snapdragon variation just outputs SONY_IMX240.

You can check your Note 4 phablet by opening the dialer and typing *#34971539# and hitting the ISP Ver Check button.

Anyway, this raises the question – does the Samsung Galaxy Note 4 (Exynos) camera support phase-detection autofocus? The sensor does and it is used in the Galaxy S5. Samsung tries to equalize performance between the Snapdragon/Exynos versions but the ISP version does differ from that of the S5.

Why 1080p? 2k displays make a world of difference on large amoled displays because it completely hides the pentile matrix. The performance isn't hindered that much either by the high resolution on my note 4.

which one is better in term of camera?