Galaxy S II in the US: One Phone, Three Carriers, Three Names

A black silicone gel case's information posted over at an online retailer revealed that it can easily fit not one, but three different Galaxy S II handsets. Wait, what? Yes, the case in question is more than happy to suit up the AT&T Attain, the Verizon Function and the Sprint Within - all of them Galaxy S II twins. 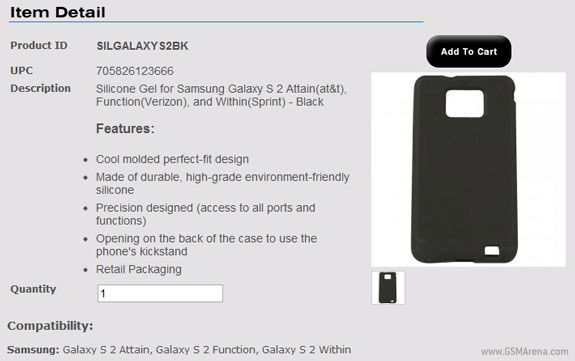 What this actually eludes to is much the same story as with the original Galaxy S. For the European market the Galaxy S was one device that was available on a variety of carriers, but in the US, it was segmented and each came with slightly different physical attributes and even nuances in hardware. AT&T had the Samsung Captivate, Verizon the Fascinate, Sprint the Epic 4G and T-Mobile the Vibrant.

This accessory's description mentions no less than three S II variants on their way to the US - the AT&T Attain, the Verizon Function and the Sprint Within. Whether or not this means that T-Mobile US aren't including, a Galaxy S II handset in their line-up this year, or there just haven't been any silicon cases spotted for a T-Mobile type S II remains to be seen.

What this does mean is that unlike their Galaxy S older brothers, these newer handsets will probably look pretty similar to each other as they'd have to in order for this case to work on all three devices, probably not a bad thing either. The standard Galaxy S II has some good genes and it'd be a shame to lose that clean look with designers trying to go overboard for brand differentiation, we'll wait and see though. Of course as we've only just learned their names, specs and release dates are a little way off, but we'll keep you posted as soon as we know.

i guess t-mobile doesn't have it because they already have a similar high end phone, the htc sensation 4g

I got mine...im typing this comment from SGS2.. So far so good(only2days). love samsung sorry nokia that i have to leave u finally.

These US carriers will slow down updates again with their crapwares, like they did on Galaxy S.