The newly uveiled Huawei MateBook 16 strikes a great balance between power and portability. It’s a 16” laptop that features the latest H-series APUs from AMD, but still finds a way to keep things relatively light and weighs a hair under 2 kg, despite the nearly all-metal body.

A dual fan solution keeps the APUs running cool even in the high TDP mode. The setup features two 2 mm heat pipes that lead to heat sinks with an innovative “shark fin” design, which are blown by two 75 mm fans.

There are no options for an external GPU, but the Vega GPU is fast enough to handle most other workloads that don't involve gaming. Regardless of which APU you pick, you get 16 GB of dual channel RAM and an NVMe SSD (there’s only one SSD bay). 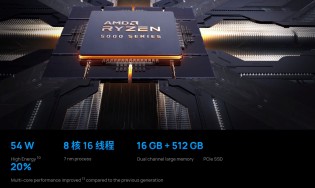 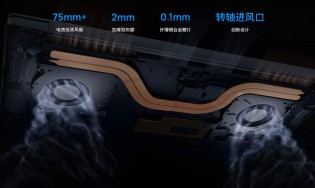 This is an IPS panel with HDR support (8 bit + FRC) that offers 100% sRGB coverage with excellent color calibration (deltaE is under 1). The contrast ratio is good (1,500:1), but the brightness is a tad disappointing as it tops out at 300 nits. At least it supports flicker-free DC dimming. 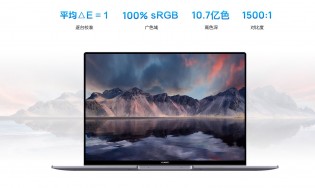 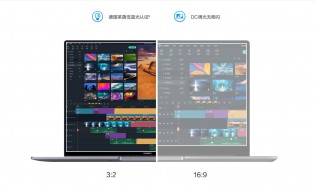 Stereo speakers straddle the backlit keyboard, but we have to point out that the keyboard is a pretty minimal configuration – there’s no numpad, even navigation keys like Home/End need the Function key (that may be okay on a 13” laptop, but seems off on a 16” one). On the plus side, there is an expansive glass touchpad and you get a fingerprint reader built into the power button. 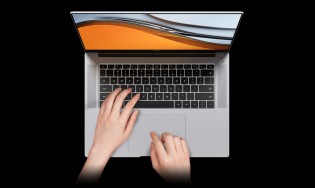 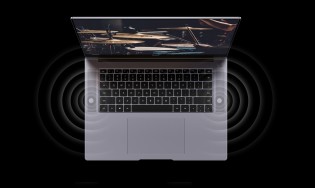 The Huawei MateBook 16 has a fairly rich port selection, starting with two USB-C ports (we’ll get back to them in a second), two USB-A 3.2 Gen1 ports, a full size HDMI and a 3.5 mm headphone jack.

There’s no Ethernet jack on board, but you get Wi-Fi 6 for fast wireless connectivity. The only other thing that’s missing is a memory card reader.

Charging is done via the USB-C ports – Huawei has bundled this laptop with a monstrous 135W charger. This one also supports Huawei’s SuperCharge tech so it can max out fast-charging Huawei phones.

Back to the laptop, it has an 84 WHr battery, which can play 1080p+ video for 12 and a half hours straight. Temperature sensors monitor the battery and can cut off charging if it ever gets too hot.

The laptop comes with Windows 10 pre-installed and a suite of Huawei Share features that integrate other Huawei devices. For example, you can quickly open a file from your Huawei phone onto the laptop or directly use phone apps on the laptop.

The Huawei MateBook 16 is available in two colorways

and keyboard without num pad isn't keyboard !! so bad that's why everyone has laptop and they need to connect external nice full size keyboard becuse typing on laptop is disaster... If you would be the clerk or office worker u woul dkno ...

u crazy?THE WORST .. they been trying some buterfly sh!t and everyone hated it.. they went back to nice standard scissors.. and their black keys blaah cheap looking... ONly keyboard which I loved from them was in macbooks pros in 2007 nice silver...

why all laptops do the arrow enter key! because why not inconvenience for us!