HTC has finally announced Rhyme. It's a mid-range Android handset targeting the female smartphone users out there. The gadget was previously rumored as HTC Bliss and leaked numerous times in pictures, specs, spy shots, etc.

Despite the lack of surprise about it, the Rhyme still looks pretty sweet. It is based on the Qualcomm MSM8255 Snapdragon (MSM8655 for Verizon) featuring a 1GHz single-core Scorpion processor, Adreno 205 GPU and 768MB RAM. HTC Rhyme utilizes a 3.7-inch WVGA display and has 5 megapixel snapper with 720p camcorder, 4GB internal storage, 8GB pre-installed microSD card and the usual connectivity package.

HTC Rhyme runs on Android 2.3 Gingerbread and comes with the latest Sense UI 3.5 on top of it. There is also the HTC Watch service for on-demand Hollywood movies streaming.

The most interesting part about the Rhyme is its retail package. It comes with a docking station, a "sports armband", a Bluetooth headset and a "Charm cable" that has a small cube, which lights up for incoming calls and messages. There is also a nice in-ear wired headset with music controls. All the accessories will come in the Rhyme color. The Verizon's Rhyme will come in "lavender", but we already saw a silver version too. 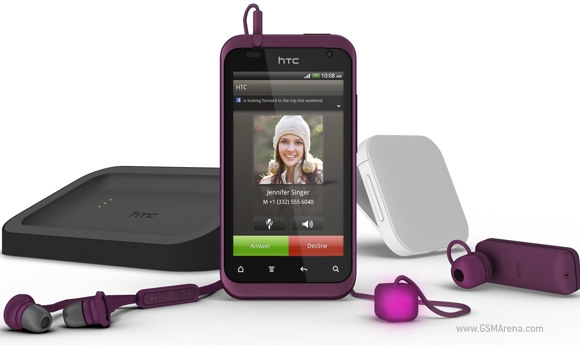 There is nothing mentioned about the previously rumored pouch. We guess it might be a market-dependent thing.

The HTC Rhyme is hitting Verizon's network on September 29. Europe and Asian markets are going to get it in October. There is nothing on the price yet, but it shouldn’t be too expensive.

I want to buy this phone which can be bought in Indonesia?????

Actually there were real phones (not smartphones) with lots of apps for ladies, for example when one gets pregnant, what to eat when one thinks one is fat and so on.