The LG G2 is finally official with a 5.2-inch screen, Snapdragon 800

At 5.2-inches, the LG G2 has a slightly bigger screen than the current crop of high-end smartphones. The resolution however, is the same at 1920 x 1080 px. The screen is a IPS unit with a brightness rating of 450nits. The LG G2 display uses something called Graphic RAM (GRAM) to reduce power consumption up to 26% when displaying a still image. LG claims this increases the expected overall battery life by up to 10%.

What's particularly striking about the phone is ultra-slim bezel and the lack of any hardware keys on the front (or sides, for that matter). 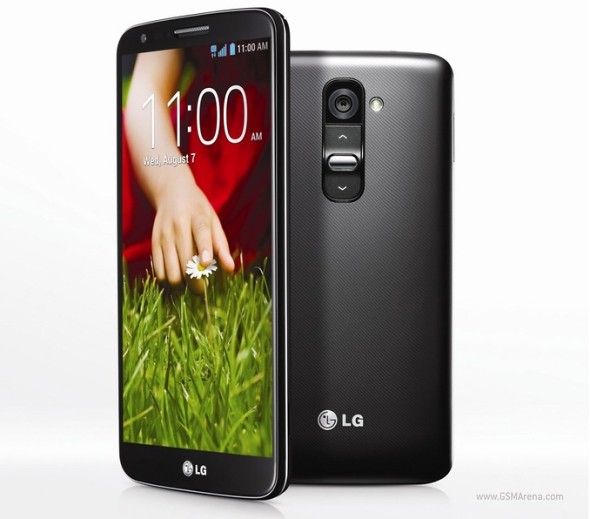 The only hardware key is actually positioned on the back. It's actually a combo of several buttons in one. That's the power/sleep key dead center along with the volume keys. The volume keys also double as shortcuts for the camera and Quick Memo feature. The reason behind the decision to position this key here is to make handling extra large smartphones easier and less prone to dropping.

The LG G2 is based around a 2.3GHz quad-core Snapdragon 800 chipset with 2GB of RAM and an Adreno 330 GPU. According to Qualcomm's CEO, who appeared in stage today, the G2 is the first phone to launch on a world-wide scale with this top-shelf processor.

The storage capacity is set at either 16GB or 32GB. Supposedly, there is a microSD slot as well, but it seems that will only be available in certain markets and the units LG brought to NYC didn't have such a thing.

The 13MP camera is on par with the rest of the top notch hardware. It's got optical image stabilization (OIS) and can record FullHD 1080p videos in up to 60fps.

LG has also worked hard on the quality of audio output. The phone can reproduce Hi-Fi 24 bit/192kHz. LG has also collaborated with the Vienna Boy's Choir to freshen up the available sounds and ringtones on the device.

As customary for Android flagships, the LG G2 offers several proprietary features to differentiate. You can double tap on the screen to wake it up and tap again to turn it back off. The phone will readily auto answer a call when you pick it up to your ear. There is an innovative Guest mode to secure the privacy of your data when friends want to check out your new smartphone or when you hand down your phone to your kid.

Finally, you can get rid of a currently active app and minimize it by a three-finger swipe across the screen.

Speaking of multi-tasking, the G2 can store your app progress in up to three different apps. The screenshotting feature can capture a whole webpage or a long email, not just the content in your viewport.

The LG G2 also has an Infrared port that can be used to remotely control home entertainment devices by learning from their conventional remotes.

Connectivity-wise, the LG G2 makes use of the latest generation LTE-A connectivity (up to 150Mbps), as well as dual-band Wi-Fi and Bluetooth 4.0.

LG G2 will be available in black or white and will launch to over 130 carriers in the next eight weeks starting in South Korea, followed by North America, Europe and other key markets.

hmmm, it looks like i'm more interested in xperia z1 (honami)for its 20,7 mp camera with xenon and led flash combo, 4k video recording, ip 58 certified, playstation mobile certified.. I guess i will wait until all the flagship smartphones released of...

samsung iphone...it's too boring to us.. everyboby use same phone and brand.. hate that. plz other makers do something we need various style and brand..smart phone