The Microsoft Store is selling Lumia smartphones once again

Looks like Windows Phone is back on the menu boys! Cheesy references aside, it's no joke. Listings for the Lumia 950, 950 XL, 550 and 650 can all be found on the official Microsoft Store website. A sales rep even confirmed, what we can only assume was a random find, since the Lumia phones do not appear under the "all phones" category at all:

They are recently back this early February. Specifically, on February 4th 2018

That's a pretty long time for nobody to notice, but then again, the Lumia mobile line has been presumed dead for quite some time now. Although never officially stated, unless you count a couple of Joe Belfiore tweets as official that is, the general assumption over the past few moths has been that Microsoft is shying away from the smartphone scene, for now. Or, alternatively, working on the elusive and mythical Surface Phone behind the scenes. 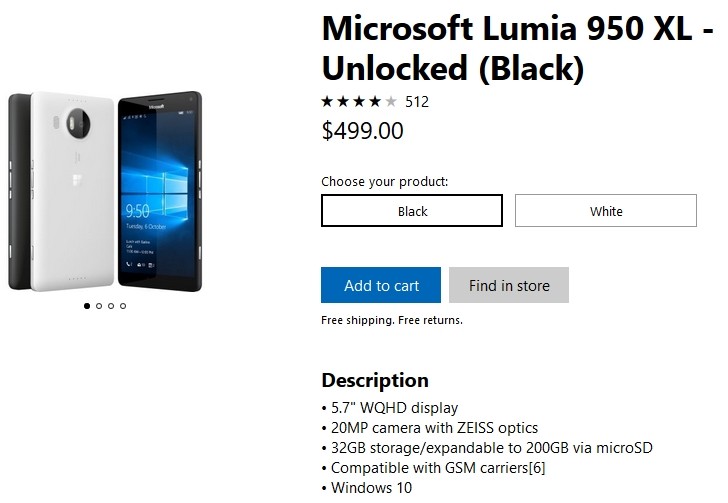 That being said, we are not sure what to make of this sudden comeback. It might be just a case of trying to move old stock, without taking the state of the Windows 10 mobile platform or the potential end-user experience under much consideration. A less likely, but still plausible scenario would be viewing this as a sing of an extended support program for the platform.

In any case, if you still fancy one of the above devices, they can be picked up from the following links:

No I couldn't find any

100% agree with you! MS is a far superior system than android. Other than lack of apps, the MS OS is far more stable, easier to use, and so much better looking (UI) than iOS and Andoird.

If one feels like switching to Windows it's still time to grab an HP x3 or Alcatel Idol 4S for cheap.