Everything is set for Apple to introduce the iPhone 12 series this coming Tuesday on October 13. The long-awaited keynote will commence at 10AM PDT (5PM UTC) at Apple Park in Cupertino and now we have a nice summary of what to expect. Chinese tipster @Kang, who holds a strong reputation with his past leaks and got the stamp of approval from @IceUniverse compiled a detailed post with all the key iPhone 12 details including pricing and availability. 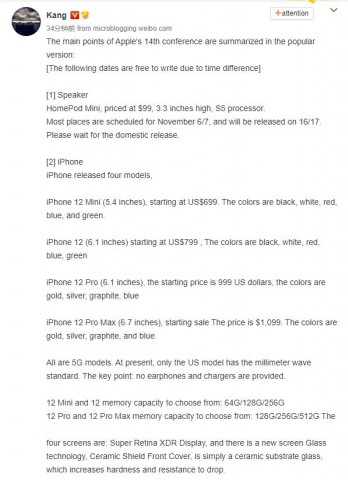 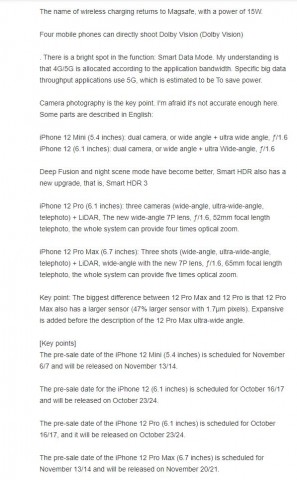 Four phones are expected with an entry-level iPhone 12 mini starting at $699 in its 64GB trim. Apple’s most affordable new phone will boast a 5.4-inch display. We also have the regular iPhone 12 and 12 Pro with their 6.1-inch screens as well as the iPhone 12 Pro Max coming in at 6.7-inches. 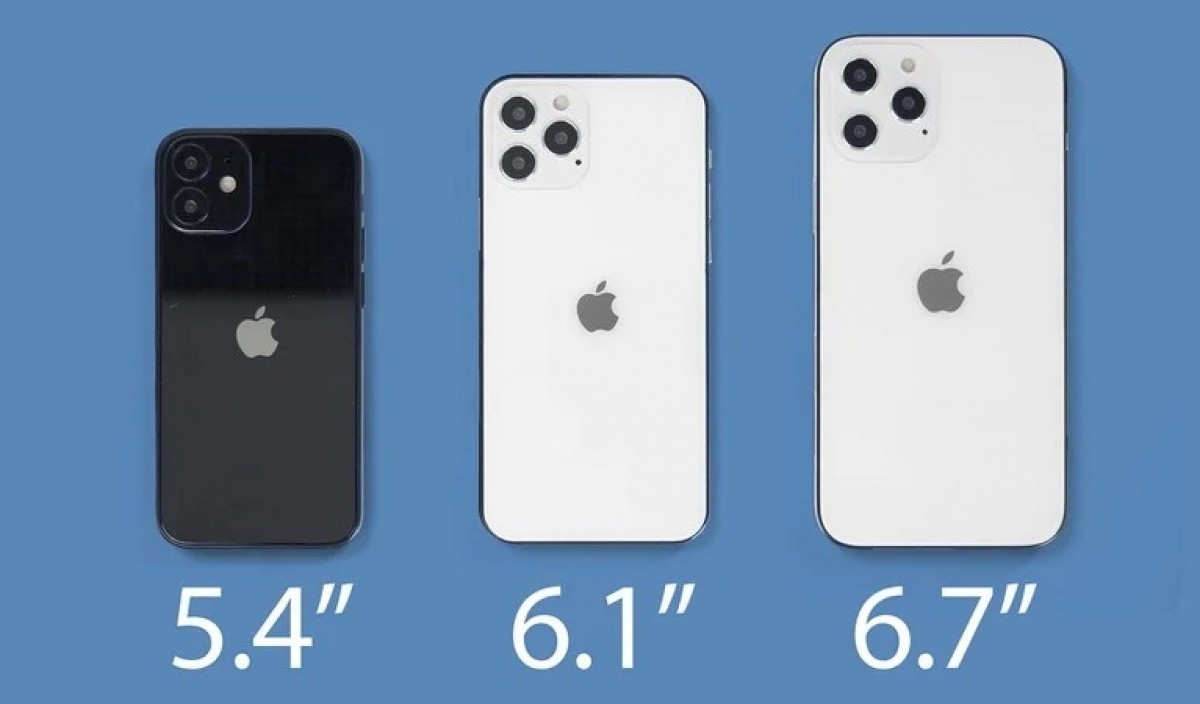 All new models get Super Retina XDR displays which feature increased hardness - we suspect it's Corning's latest Victus glass, although the tipster makes no mention of it. Like the rest of the lineup, the entry-level iPhone 12 will boast 5G connectivity but only US models will support the faster mmWave standard. Apple will introduce Smart Data Mode which toggles between 4G and 5G based on app bandwidth with the goal of preserving battery life.

In terms of cameras, the 12 mini and vanilla 12 will pack a dual setup with a regular wide and ultrawide-angle combo with f/1.6 apertures. The Pro models get wide, ultrawide and telephoto cameras as well as a LiDAR sensor. The tele on the 12 Pro is said to be 52mm equivalent with 4x optical zoom while the Max bumps it up to 65mm with 5x optical zoom. 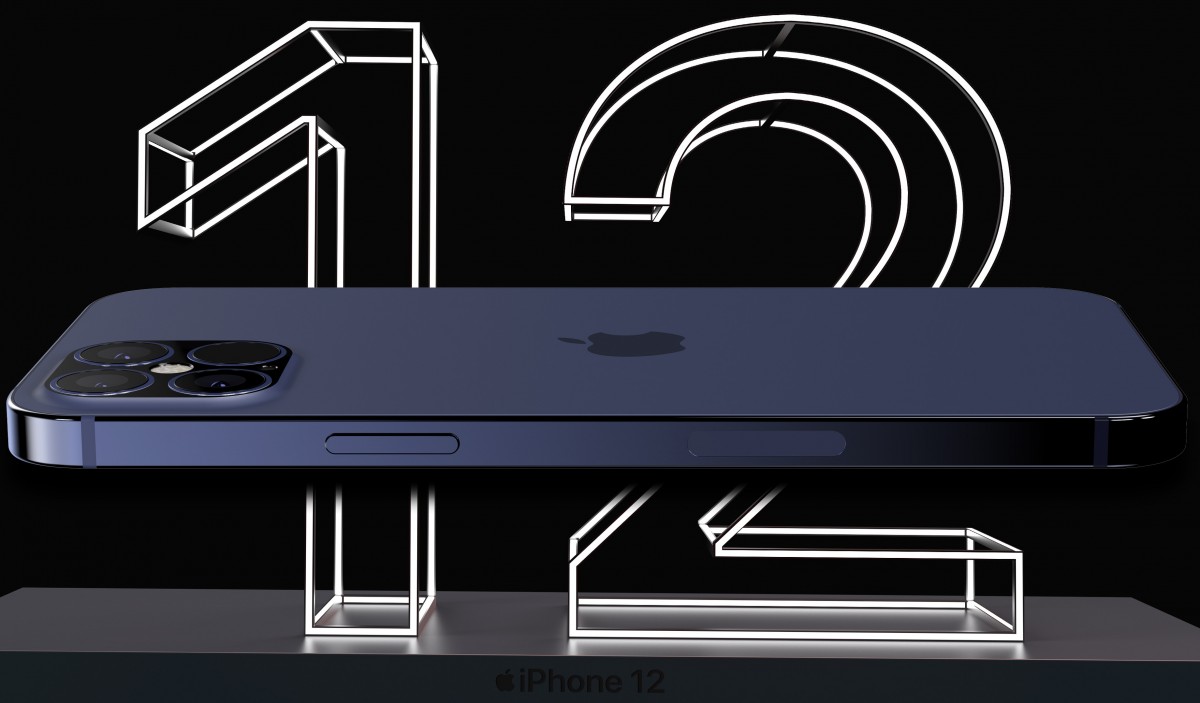 Apple is bringing back Magsafe charging though this time it will be in wireless form and with 15W speeds. According to past leaks, all new iPhone models will support wireless top ups via a proprietary charger which attaches to the back of the phones via magnets.

Pricing for the new generation of iPhones starts at $699 for the 12 mini and $799 for the vanilla 12, both with 64GB storage. Those two will get 128GB and 256GB upgrade options and will come in black, white, red, blue, and green colors. 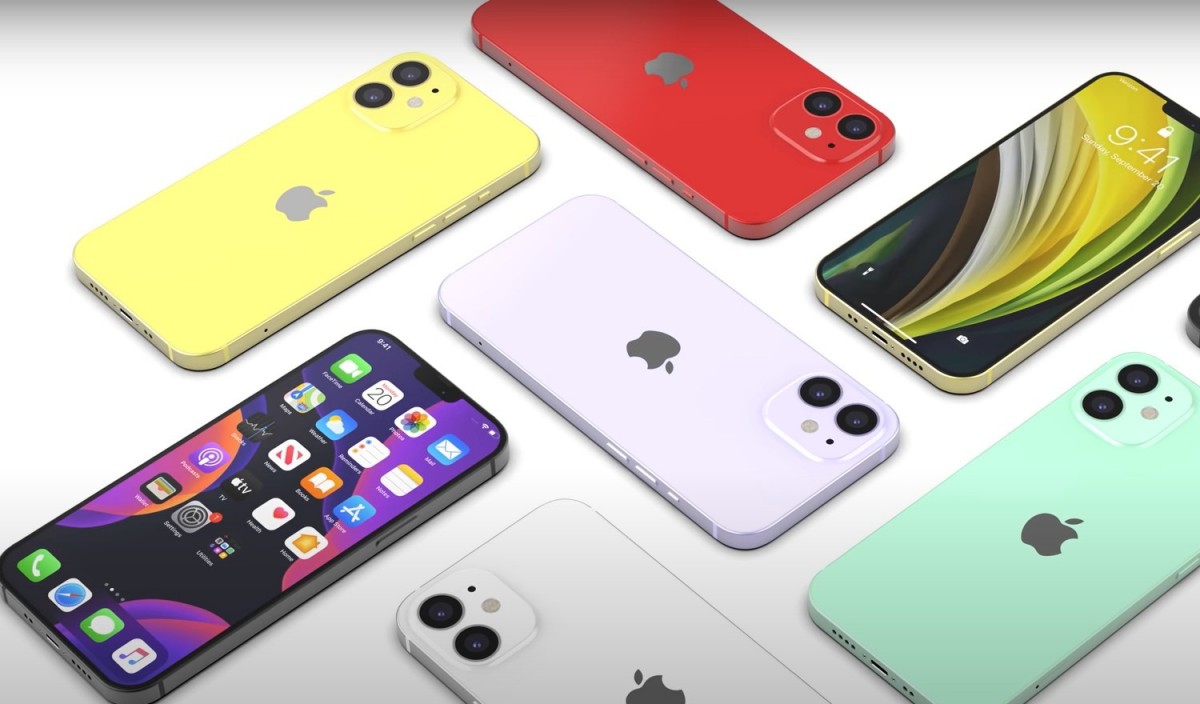 The mini is expected to hit markets around November 13 while the regular iPhone 12 should go on sale on October 23 alongside the 12 Pro. The 12 Pro Max sales will tip-off on November 20. These are all US launch dates, although most major markets will probably follow a similar timeline. 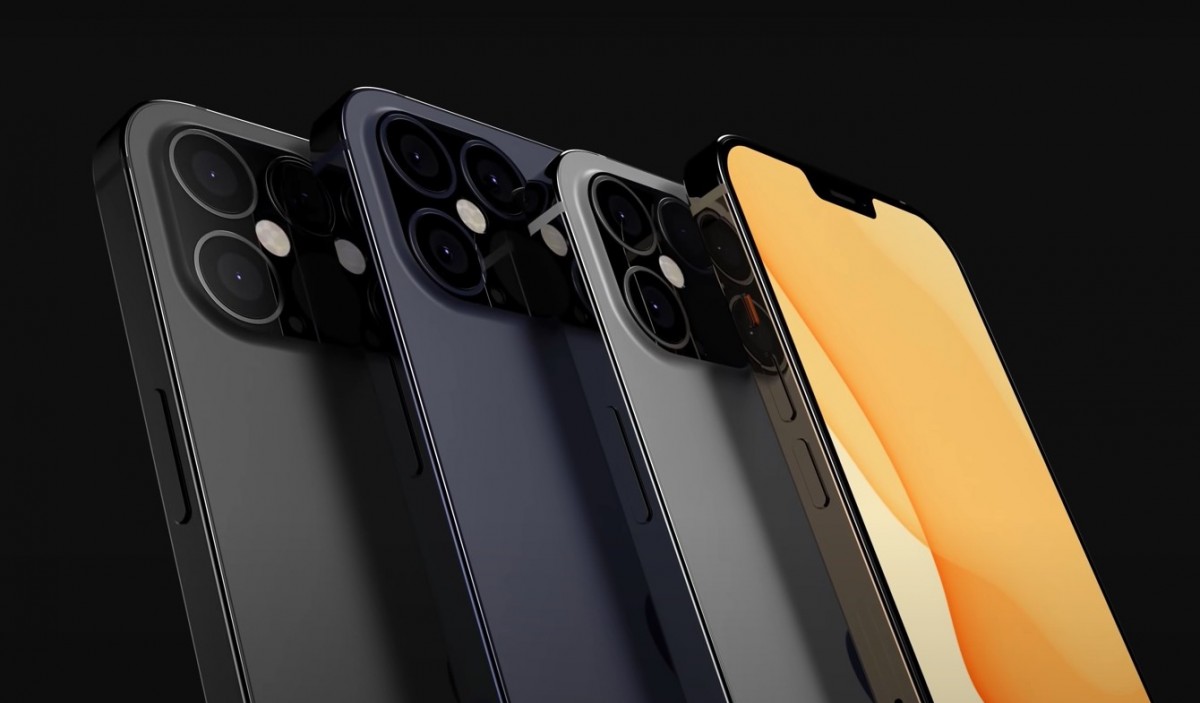 Apple is also expected to announce its new HomePod Mini which comes in at 8.4cm in size, packs the S5 chipset and a $99 price tag. Sales should commence on November 16.

yah, sure. you have to pay for a brick either way, but in addition you have to make sure that charger does not fry your phone. so, what's your point?

If the rumors are real, the notch may disappear by next year. What I don't really understand why there is no option to hide the notch? On Android this is an old thing. You hate it? You hide it!

That's what she said. Lol. You're prolly doing it wrong.