The Motorola Wilder is a splash and dust resistant dumb phone

Slated for a July release in the UK, the Motorola Wilder promises to be a smart-dumb phone aimed at an active lifestyle.

The newly announced Wilder is designed to bring all the basic functionality from your average smartphone in a tiny package with a rugged exterior. Not all the specs are available yet but we know it's going to be a compact device with a capacity of just 88 cubic centimeters and a low weight of just 92 grams.

The announcement promo for the Motorola Wilder

A rubberized outer casing helps give the Wilder its splash and dust resistive attributes but you can still interact with it on the 2.8" TFT resistive touchscreen (with a resolution of 240x360 pixels). Sitting just below the main display, is a secondary OLED 0.7" screen for notifications, a nice touch and something seldom seen since the days of the flip phone. 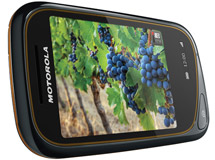 Being a feature phone, connectivity is limited, but the Wilder does come with Bluetooth 2.1, a 3.5mm headphone jack and has a physical microUSB (v2.0) port on the left side of the device covered by a rubberized tab. It also comes with a 2MP camera on the back that can shoot video at 15fps and an FM radio.

We're not sure exactly what UI the Wilder will run, since Motorola doesn't have a feature phone UI in place on current phones - especially a touch one.

Anyway, software-wise the Wilder will have pre-installed Opera Mini for web browsing, social networking integration with Facebook, Myspace, Twitter and YouTube, embedded games including Tetris and Need for Speed and 5MB of internal storage with a microSD slot that can take anything up to 32GBs.

The Motorola Wilder is expected to come to Carphone Warehouse in the UK from July and will cost around £49.95.

well done!! U done it but make some os of it. My sugesion is to make all touchphone waterproof screen

This looks like a neat little phone! The looks and experience of a smartphone but with a standard default OS. I think this phone may drive people away from their standard keyboard GSM's and partly introduce them to smartphones (touchscreen etc) ...

The reason for resistive is some people do activities that require the wearing of gloves but totally understand what you mean. Saves modifying gloves or wearing special ones to access a cap/screen . Personally i'd have preferred to see it buttoned an...