At its event today Apple didn't only introduce new phones and tablets. The new Apple TV made its debut as well.

The new set top box comes with an innovative remote that has a glass touch surface on the top, which lets you glide across lists, hopefully making the task of navigating the interface easier than it's been before. Touch interaction is also employed when you want to skip ahead in a movie or TV show you're watching.

The remote comes with Siri built-in too, and you can talk to her and ask her things with a dedicated button. If you're looking for something to watch, Siri searches through iTunes, Netflix, Hulu, HBO, and Showtime. You're also able to ask Siri stuff while you're watching something, including things related to the content you're seeing such as "Who stars in this?". In these cases, Siri will answer in the lower part of the TV interface, so as not to disturb your viewing. Commands like "Siri, skip ahead 5 minutes" work too. 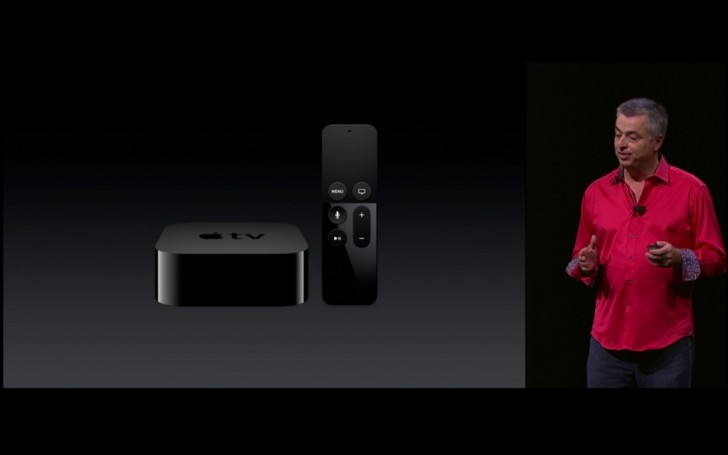 Apple Music is now a feature in Apple TV, and there's an app store for access to even more stuff. You have access to your photos, and new high-res video screensavers are included.

Games are a big part of the new Apple TV platform, and the new remote acts as a gamepad when needed. Expect to see Apple TV versions of a lot of popular iOS games soon, as well as some exclusive titles. For some reason, you'll be able to do shopping on your Apple TV if you want to, with big images of clothes, for example, showing up on your TV. Upcoming apps will be responsible for this.

The new Apple TV has a 64-bit A8 chip. The remote works via Bluetooth 4.0 and has an accelerometer, a gyro, three-month battery life with normal use, and the Lightning port for charging.

For the 32GB version of the set top box you'll have to pay $149, while the 64GB model will retail for $199. They will both be out in late October in over 80 countries, with 100 countries getting the new Apple TV by the end of the year. Interestingly, the existing Apple TV will still be sold for $69. Developers will get their hands on the new version of tvOS today, so they can start working on those apps.

will there be any update for currant madels