OnePlus 7T to be unveiled on Sept 26 in India and US but without the 7T Pro?

The OnePlus 7T series will be unveiled in India and the US first on September 26, the company just announced the news on social media. There will be a second launch event in London on October 10. 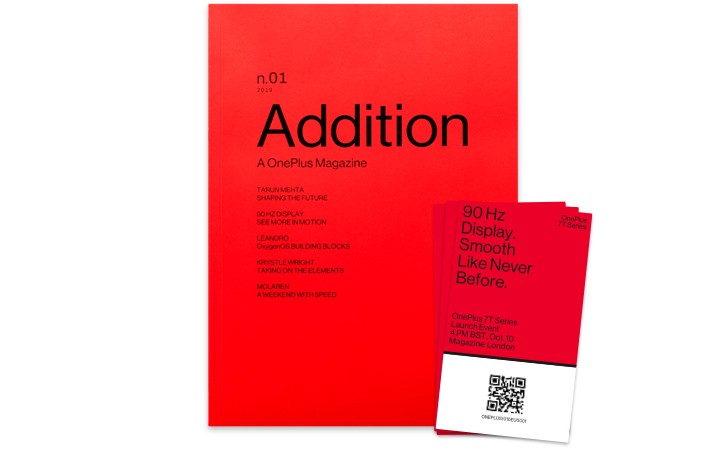 In addition to the usual OnePlus swag you get at the event, you’ll also receive a copy of the first-ever OnePlus magazine, fittingly called “Addition”. As for the tickets themselves, they leave no doubt about the theme of the event – 90Hz screens.

Interestingly, the teaser on the OnePlus US landing page only talks about a 'OnePlus 7T reveal', while the other regional landing pages we saw mentioned a 'OnePlus 7T series launch' giving substance to the rumor that OnePlus will only be launching a single phone in the US and it's the updated OnePlus 7T and not the Pro.

You can see below how the US video differs from the one embedded above.

The Indian OnePlus landing page also refers to 'OnePlus launch event'. Amazon India's landing page, however, urges us to subscribe "to get all the updates of OnePlus 7T launch' making it highly possible that only one updated smartphone will be launched in India as well.

Then again, it may be more than smartphones that the company will present in India. The OnePlus TV is supposed to launch there first.

The event will be livestreamed on OnePlus.com and YouTube. Or you could attend one of many pop-up events around the world where OnePlus fans gather to experience the unveilings live. Better yet, you can win a free trip to New Delhi or to London.

PS. The goodie bag includes OnePlus Bullets Wireless 2 (worth €100), a Sketchbook and a sticker set (also, there will be snacks and refreshments at the venue).

Sony should bring back their cyber shot and Walkman series. Siemens should reintroduce mobile phones in the same price range of OnePlus. I am sure they can take the market,as Siemens were the largest brand in Europe once. Imate and O2 also ...

Three of my employees are using OnePlus. One is using 5t and others are using 6t, there was a time I use to think of buying an OnePlus because of its screen size. Fortunately Samsung introduced Galaxy A50 with bigger screen and camera than OnePlus wi...