The OnePlus Nord special edition will be Gray Ash

OnePlus teased a special edition of the Nord and it looked like it will bring back its trademark Sandstone back, however a mix-up revealed that is not the case – instead the new color option will be called “Gray Ash”. 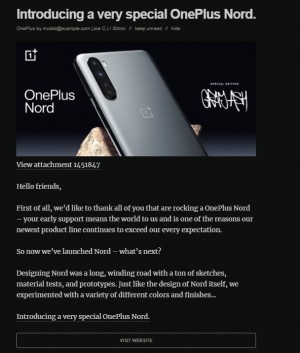 This color first leaked back in July when it was discovered in the OxygenOS source code. Then in August Roland Quandt tweeted that it will be unveiled in October and it looks like he was on right on the money.

Anyway, it’s not quite clear how Gray Ash will differ from the current Gray Onyx color, though a bit of snooping around the OnePlus online store reveals this color swatch. It appears that the Ash will be lighter and less blue than the Onyx.

The new Nord color will be announced at the OnePlus 8T event, which you can watch here. The event will also bring a new OnePlus Buds version (or two).

its cover of xperia

Hey don’t give them ideas 😂