Redmi Note 9 to use Helio G70, the Pro model will have a Snapdragon 720G

The Xiaomi Redmi Note 9 Pro is expected to be powered by a Snapdragon 720G chipset. But what about the non-Pro model? Geekbench may have given that away, two days before the official launch on March 12.

The Xiaomi Merlin – suspected to be the vanilla Redmi Note 9 – ran Geekbench v5.1 with what appears to be a MediaTek Helio G70 chipset. It couldn’t go as high as the score of the Pro model, which uses the aforementioned 720G chip. 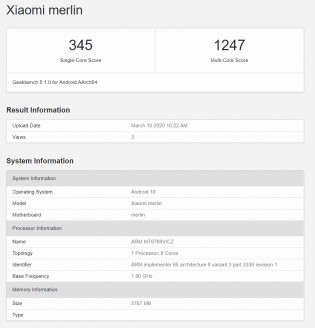 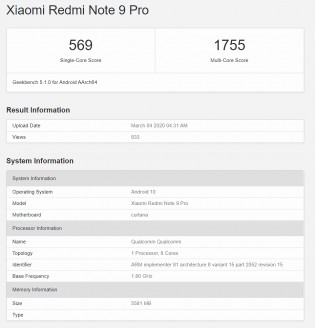 Long story short, both have two “big” cores, but the Snapdragon uses Cortex-A76 instead of A75. Expect the Adreno 618 GPU to run circles around the Helio's Mali-G52 MC2 as well.

Somewhat surprising is that the Redmi Note 9 features 6GB of RAM. Based on the latest rumors, the Pro version will come in 4/64GB and 6/128GB configurations. We still don’t know much about what will separate the vanilla and Pro models besides the chipset, but it seems that RAM will not be it.

In case you were wondering, it looks like the Snapdragon 720G is faster than the Helio G90T found inside the Redmi Note 8 Pro, while the Helio G70 obviously isn’t. Also, a smaller Redmi 9 is expected to launch soon, also with the Helio G70. The two chips were recently featured in the Realme 6 Pro (720G) and Realme C3 (G70), so that should give you an idea what the Redmi Notes will be competing against.

Its clear that Xiaomi is now so big a company that they no longer have to provide the best value any longer. Look at have much value Note 8 Pro and Mi 9T added to the customers.. and they are now a year old.