The Samsung Galaxy M31 may gain a macro camera, just like the A51

Early leaks about the Samsung Galaxy M31 suggested that there will be no changes to the rear camera compared to the Galaxy M30s. However, a panel from the camera bump allegedly belonging to the M31 shows an extra hole – that’s one more camera.

The Galaxy A51 and A71 similarly gained an additional camera, specifically a dedicated macro module. So, it’s not unlikely that the new M-series phone will follow suit. 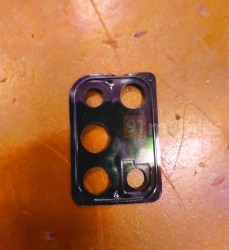 Macro cam aside, the Galaxy M31 is expected to keep the 48MP main and 8MP ultrawide cameras, the depth sensor too. The phone is also expected to keep the same chipset, Exynos 9611, though we’ve seen claims that it will use Snapdragon 665 instead (the choice of chipset may depend on the region).

while I'd like to see galaxy m31 to feature better chipset than exynos 9611, it's unlikely since galaxy m30s are the budget friendly version of galaxy a50s, so it'll possibly using the same soc. exynos 980 sounds too good to be true, because i t...

Want expecting another model so soon after the M30s?