Samsung Galaxy Music goes official, has a dual-SIM version too

Samsung has just officially announced the Galaxy Music. The smartphone is aimed at music lovers on a tight budged, who want to get an Android-packing device with superb sound quality and advanced music player features. 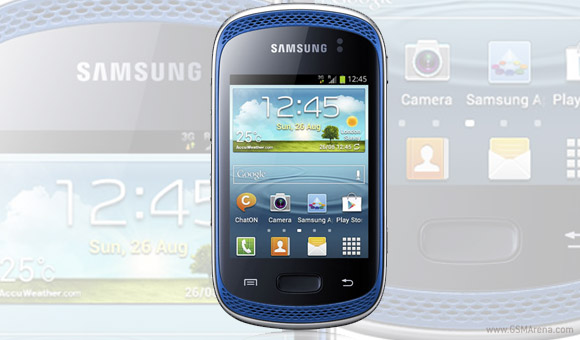 Running Android 4.0 Ice Cream Sandwich, the Galaxy Music is built around 3.0-inch QVGA TFT display. Sadly, the processor specs haven't been fully disclosed yet, but we know there's 512MB of RAM and 4GB of storage available. Happily, microSD card slot is available to expand the memory by up to 32GB.

There's a 3MP fixed-focus main camera at the back with no flash. Connectivity is covered by Wi-Fi b/g/n, Wi-Fi Direct, Bluetooth 3.0 and microUSB port.

The little smartphone also features a 9-lumen WVGA projector. Just like with Samsung's other projector-packing smartphone, the Galaxy Beam, the one on the Galaxy Music is placed at the top of the device.

Update: We were contacted by a Samsung representative, who claimed that the projector part was a mistake in the press materials and the Galaxy Music won't be having such functionality.

Pricing and availability are still a mystery, but Samsung will also launch a dual-SIM version of the device called Galaxy Music Duos.

what is the price of this phn and what is the expected date of launch.

The screen looks awfully small!ics looks beautiful on a bigger screen!Lets wait for the full specs to arrive!And let the price be under my budget!!!!Finally we are getting budget priced ics handsets!!!