The 'Wave 2' name suggests that the duo boasts specs even more impressive than the original Samsung Wave, but that's not the case. The Samsung S5330 Wave 2 Pro as you might have guessed already has a slide-out QWERTY keyboard but other than that it's almost identical to Samsung S5250 Wave 2. Both however don't have a lot in common with S8500 Wave. 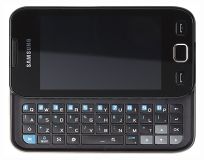 The screens are 3.2" TFT units with WQVGA resolution - so, the Wave 2 and Wave 2 Pro screens won't provide the sweet image quality of the high-res SuperAMOLED that the first Wave had. The rest of the specs are equally toned down.

The Samsung S5250 Wave 2 and S5330 Wave 2 Pro are 2G only, though they do have Wi-Fi 802.11n to step up when the quad-band GSM/EDGE doesn't cut it. The camera is 3MP and there's a microSD card slot to expand the internal memory. Bluetooth and GPS round off the relevant specs of the new members of the Bada OS club.

One of the key features of Bada - Social Hub - is the go-to place for contact info and communication. The Samsung S5330 Wave 2 Pro and S5250 Wave 2 cover social networking, IM and email with ease.

There's no pricing info yet, but the Samsung S5250 Wave 2 and Samsung S5330 Wave 2 Pro will become initially available in Russia and South East Asia in August.

it is so sexy

is it have internet