Dell’s new 2-in-1 laptop just went on sale. But what’s most interesting about it is that it’s the first 2-in-1 computer to support wireless charging. That is, if you shell out the extra $550 it costs to get the 7285’s wireless charging keyboard accessory and the charging mat that goes along with it (keyboard only will set you back $380, the charging mat is $200). Mind you, the tablet computer is already pretty steep starting at $1200.

While the tablet itself doesn’t actually charge wirelessly, you’ll need to have the 2-in-1 docked to the wireless-compatible keyboard. In addition, Dell says that the charging pad is not designed to be used on metal surfaces. 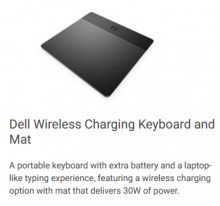 In fact, if you want to use the computer on a metal surface, you’ll need to use a non-metal stand that would raise the base at least 50mm (almost 2 inches). Perhaps wireless charging isn’t the most practical (or cost effective) method of charging on the Latitude 7285 2-in-1.

The Dell Latitude 7285 starts at $1200 with a Core-i5-7Y54 and 128GB of internal storage. 8GB of RAM and a 12-inch display really push the entry-level specs. Check out Source 1 for the press release or Source 2 for Dell's product site.

1200 WoW the primary specs are good but there wasnt any sign of GPU. If the add noone or integrated one they can keep their thing for them selves. I would never buy a Notebook, Laptop with great GPU. Integrated one is not an option. Also big ...

this is a good thing for next generation...

This will drive other OEMs to compete for something like this as well. I'm surprised MS didn't lead the way with this one. Dell is awesome these days.