Sony has a Darth Vader-themed PlayStation 4 bundle coming our way. The special edition gaming console will hit the shelves in two guises on November 17, though pre-orders are due to begin soon. 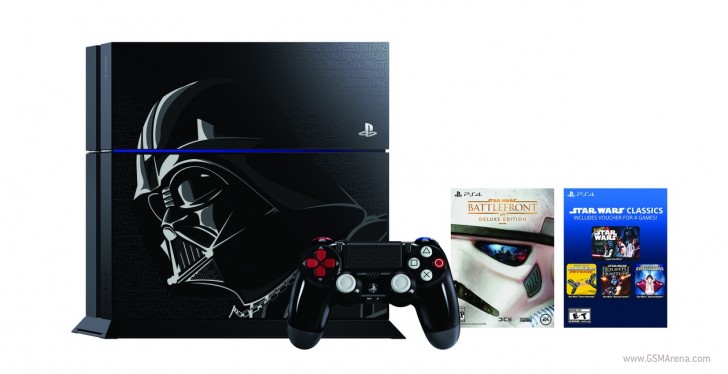 The Star Wars Battlefront limited edition PlayStation 4 bundle will consist of a 500GB console with an image of Darth Vader and a gaming controller inspired by the Sith lord’s chest panel. Content-wise, buyers will get Star Wars Battlefront Deluxe Edition and download voucher for Super Star Wars, Star Wars: Racer Revenge, Star Wars: Jedi Starfighter and Star Wars Bounty Hunter. The classic games will be playable on on PS4 for the first time.

Walmart on the other hand, will exclusively offer the console with Disney Infinity 3.0 Edition and the above four classic titles. Additionally, the bundle will include four action figures of characters from Star Wars.

There is no word on pricing of the decked out PlayStation 4. It is reasonable to expect a price premium over the regular console.

do sony have the dragon ball z boundle on ps3????

I think you mean Vader is the man, Darth is his title like Lord or Mr. Darth mean's dark side apprentice.