Just two days after the launch of the new iPhones, Apple CEO Tim Cook sat down with Bloomberg Businessweek for a frank discussion regarding the new product launches, company strategy and talking about rival companies. He was also joined by the Senior Vice President of Software Engineering, Craig Federighi and Senior Vice President of Design, Jony Ive. 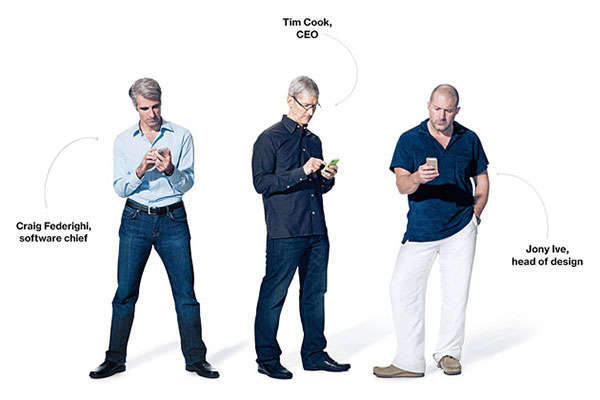 In the interview, Cook address a key topics, starting with the pricing of the iPhone 5c. Everyone expected Apple to come up with a cheap iPhone but Apple instead went for a slightly lower priced model while maintaining all the key features of last years iPhone 5.

On this, Cook had to say, Theres always a large junk part of the market. Were not in the junk business talking about the low-end devices. He went on to say We never had an objective to sell a low-cost phone. Our primary objective is to sell a great phone and provide a great experience, and we figured out a way to do it at a lower cost.

Apple has always maintained the strategy of going after high price, high profit markets. We have seen them do this with the Mac range before, where Apple never really made a cheap MacBook as such, even when people expected them to. The low-end is not a market where Apple prefers to play and they made this clear once again with the iPhone 5c.

Speaking of features and claims of Apple not innovating enough, Ive said We didnt start opportunistically with 10 bits of technology that we could try to find a use for to add to our features list. hinting at rivals such as Samsung who have often loaded up their devices with features that most people never actually use.

Federighi says it much simply: New? New is easy. Right is hard.

Speaking of the Android dominance in the market, Cook said Does a unit of market share matter if its not being used? For us, it matters that people use our products. We really want to enrich peoples lives, and you cant enrich somebodys life if the product is in the drawer. Cook pointed out that more people actually use Apples devices daily and that they have a higher customer satisfaction compared to their rivals.

As for Android fragmentation and claims of it being a non-issue anymore, Cook said It will show up in developers. It will show up for people that no longer have access to certain apps. It will show up in security issues because if youre not moving your customer base to the latest version, then you have to go back and plug holes in all of this old stuff, and people dont really do that to a great degree.

Cook also had things to say about Microsoft and their acquisition of Nokia. Regarding Microsoft, Cook feels that they are copying Apples strategy of vertical integration by now starting to make their own hardware. Cook said Everybody is trying to adopt Apples strategy. Were not looking for external validation of our strategy, but I think it does suggest that theres a lot of copying, kind of, on the strategy and that people have recognized that importance.

Lastly, regarding Nokia, Cook said that the lack of innovation is what lead to their death as a company. I think [Nokia] is a reminder to everyone in business that you have to keep innovating and that to not innovate is to die.

You can read the interview in its entirety in the link below.

You should check, innovation actually means improvement and/or invention... Apple hasn't invented anything recently (other than suing companies for marketing) and improvements... they're debatable...

Federighi says it much simply: New? New is easy. Right is hard.** **Especially if you use apple maps..LOL Check it out: http://www.bbc.co.uk/news/technology-24246646

I'm pretty sure that you have no idea what innovation means. It means improvement, not invention.