Last week, Samsung started sending out press invites for an Unpacked event that will see the debut of the Galaxy Note9. The invite image focused on the S Pen, indicating expanded stylus functionality.

And now we have some news on what those enhancements would likely be. As per tipster Ice Universe, who has a decent track record when it comes to Samsung leaks, the stylus will also act as a portable Bluetooth controller, allowing you to control music playback as well as trigger a long-range remote self-timer. 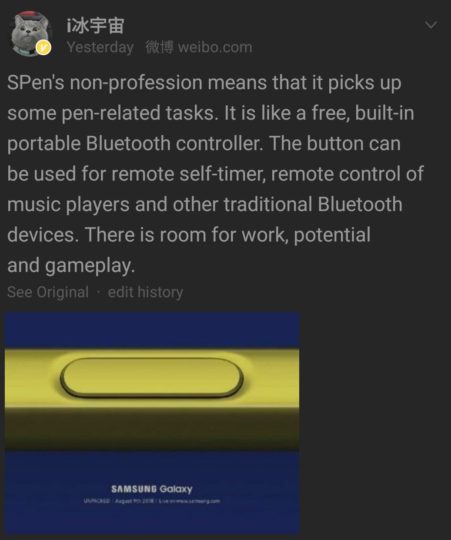 The tipster also says some gameplay features might be enabled. It's worth mentioning that this is not the first time we're hearing about Bluetooth support on S-Pen. A recent leak also mentioned it along with other new features like the ability to unlock the device remotely.

Officially, there's currently no word from Samsung on Galaxy Note9's S-Pen features, but the wait isn't too long, as the phone is set to be unveiled on August 9.

If you got the Note 8 for 500USD then good for you, I got the 256GB version back in November for a little more than 5000CNY and already I'm satisfied, it's more than 30% cheaper than the official price in China, IIRC.

You know, when I look at this press release image, I can't stop thinking that they will let users remap Bixby button. After all, Samsung is well known for listening to the users feedback. Two years after battery issue they are ready to finally bring ...

Perhaps I am missing something but why would I want music controls on my S Pen when more than likely the headphones I'm using will have them anyway and probably make a better job of it. And of course the S Pen would now need a battery. Just seems lik...