The HTC One S is one of the more impressive devices around, and is now available for $149 with a contract from T-Mobile. 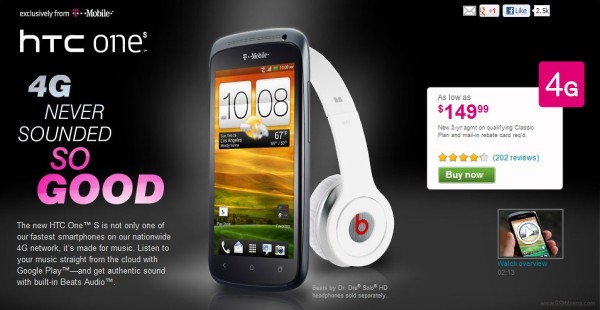 The One S, previously offered from T-Mobile for $199, was one of the first devices to run on the Snapdragon S4 chipset and its dual-core Krait CPU and is still one of the best-performing smartphones we've tested, even beating out the One X flagship in some of our benchmarks.

The HTC One S has a 4.3 inch Super AMOLED display covered in Gorilla Glass, alongside an 8 MP camera capable of 1080p video recording, as well as 16 GB of storage and 1 GB of RAM. Best of all, it has been officially confirmed by HTC to be upgradable to the latest Android 4.1 Jelly Bean build.

I suggest people in india to get this Handset thru someone in USA or UK. Since HTC One S in india comes with S3 Chipset instead of S4 in USA,UK with Krait CPU...dont get cheated by buying this phone in india..Its not worth buying in India in terms of...