The recently announced T-Mobile G2 went on pre-order in the USA only a week ago and rumor is that its sales start tomorrow, a few days earlier than expected. Meanwhile, another HTC device, the Desire HD is said to hit Vodafone's and O2's shelves in UK and Germany.

The T-Mobile G2 was unveiled a month back and, apparently, it is now ready to start selling across the US. The phone was said to start shipping on 6 October but rumor is T-Mobile US is actually about to start selling 3 days earlier, on 3 October. 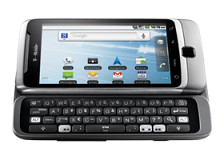 To refresh your memory, the T-Mobile G2 (which is the T-Mobile version of the HTC Desire Z) features a side-slide full QWERTY keyboard, a 3.7-inch capacitive WVGA touchscreen, a promising 800MHz CPU, 4GB of on-board storage, a microSD card slot and good 512MB of RAM.

As for its price, you can get it from T-Mobile for 200 US dollars with a new contract, while current T-Mobile customers who want to skip the the new contract part could purchase it for 500 US dollars.

As far as the HTC Desire HD is concerned, after T-Mobile UK, Vodafone is the second UK operator to start offering the powerful phone very soon. The thing already appeared on the pages of the latest Vodafone UK catalogue and should show up in the Vodafone stores before the end of the month. 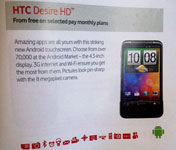 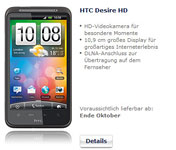 HTC Desire HD is coming soon to the UK and Germany

It also surfaced on the website of O2 Germany according to which the Android-powered device should become available in several weeks, at the end of October. And if you don’t want to sign any contracts with operators, you could always get it from some online or offline retailer. The smartphone has been on pre-order for a while.

The Desire HD runs the Android 2.2 a.k.a. Froyo and sports a zippy 1GHz Snapdragon processor as well as good 768MB of RAM. Its other noteworthy features are the large 4.3” capacitive touchscreen, the 8MP camera capable of shooting 720p HD videos and the all-round connectivity package. There is still no word from any of the three European operators on the price of the Desire HD.

While waiting for the HTC-made Droids to become available, you could take a look at our hands-on images and videos shot during the announcement of the Desire Z and the Desire HD.

there is a typo in the article. the screen size is 4.3 inches and not 3.7 inches for the desire HD