While we already have an idea about the carrier retail price of the G4 in the US, looks like now we have some information on its release date, too. According to T-Mobile's promotional Twitter account for the device, the flagship will be available for purchase starting June 2. 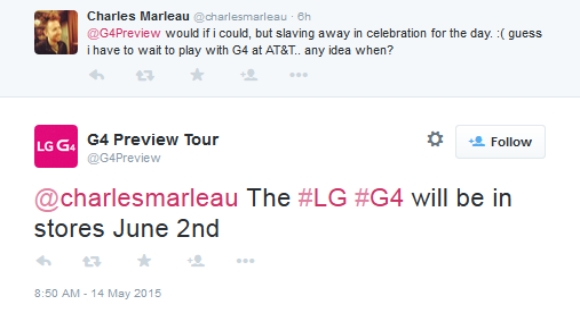 We already knew that the handset would go on sale on T-Mobile only after May 25, given that the magenta carrier is currently running an exclusive preview program for the device which runs through that date. So, a release date of June 2 falls in line with that information, although T-Mobile is yet to announce it officially.

Meanwhile, it isn't yet clear when the smartphone will be available on other US carriers, although the Verizon and Sprint variants are said to have cleared the FCC hurdle.

I want mine unlocked..Will that be directly from LG USA OR.....?