T-Mobile USA has officially confirmed two new 4G droids will be joining their lineup - the Galaxy S 4G and the T-Mobile Sidekick. Unfortunately, all the image material we have is a leaked slide with a couple of blurry shots.

While the two phones are part of an official T-Mobile press release, the details about their specs are quite scarce. Both will have HSPA+ connectivity (not 4G strictly speaking), they will run Android and both are "coming soon" but that's about it.

We previously saw the Galaxy S 4G leak as the T-Mobile Vibrant 4G. So its specs aren't much of a mystery - they're probably the same as the rest of the Galaxy S phones, except the 4G connectivity in the form of 21Mbps worth of HSPA+. 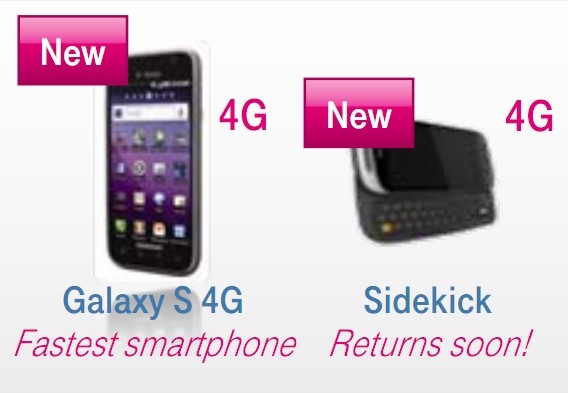 As for the T-Mobile Sidekick, things are much more vague - Sidekicks were originally produced by a company dramatically called Danger, but later they were acquired by Microsoft and tasked to create the ill-fated Kin phones.

It's official that the new Sidekick will run Android (instead of the old Sidekick OS). It's not clear who will make it though - but from that blurry shot it sure looks like Sprint's EVO Shift 4G by HTC.

T-Mobile will be adding a couple of Android tablets too, the Dell Streak 7 and the T-Mobile G-Slate tablet, which will run Honeycomb.

i (and many others) have the samsung vibrant and ive never heard of anyone saying they have an issue with the battery on their phone or on any of the galaxy phones. GSMARENA should NOT ALLOW people who DO NOT have the phone to write a review on it. d...