T-Mobile USA is in the midst of a major transition in business strategy, the so-called UnCarrier plans, and it’s firing up its brand new 4G LTE network too. So far the network is live in Phoenix and San Jose and is doing about 24Mbps downlink and 20Mpbs uplink speeds.

A few days ago leaked materials detailed which US cities are getting LTE first: Phoenix and San Jose, also Las Vegas, Houston, Washington, Kansas City and Baltimore. There are no reports of live T-Mobile LTE networks in the last five cities as of yet. 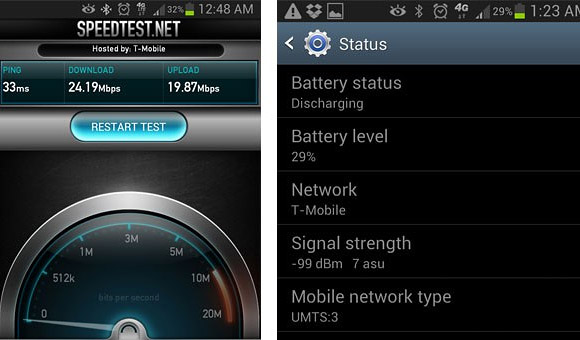 T-Mobile has an event planned for later today and we expect more info on the LTE rollout plans to be announced.

There are a few LTE-enabled devices already on the carrier’s network. The Samsung Galaxy Note II is getting a software update to enable the extra connectivity, the BlackBerry Z10 is another LTE-enabled phone. A Huawei-made hotspot will probably be unveiled at the event, the Sonic 2.0.

Not that it matters much anymore, as with UnCarrier T-Mobile is moving away from subsidized phones. Plans start at $50/month for unlimited calls and texting plus 500MB data and you can pay more for more data (up to 12.5GB for $110/month). More details should be announced at T-Mobile’s event.

Anyone knows, if it works on Canadian Network WIND this device.

Yea with a 5GB cap