T-Mobile weighs in on its future with 5G, expected to rollout in 2019

Today T-Mobile has outlined its future with 5G technology and its deployment of the 600 MHz spectrum that it acquired earlier last month. 45% of all the spectrum auctioned by the FCC was snagged by ol’ Magenta. This is basically “prime” spectrum, as lower frequency bands will reach farther from towers and deeper into building walls.

Today’s news builds on top of April’s score of 600 MHz spectrum. T-Mobile released a video announcement, which T-Mobile calls “vlogs”, where John Legere, CEO of T-Mobile, weighs in on AT&T’s “5G Evolution” strategy. Then, Legere goes on to officially announce its plans for a nationwide 5G network for T-Mobile in realistic terms (starts at 2:12 in the vlog).

I’m announcing that T-Mobile is committing to build a real, nationwide, mobile 5G network using the new spectrum we acquired

Here’s where the spectrum comes in. T-Mobile will use part of the spectrum it acquired to begin deployment of its 5G network. The other part of that spectrum would still be used to improve upon its current 4G LTE network. Once 5G gains momentum, other current LTE bands would be repurposed into 5G signal. 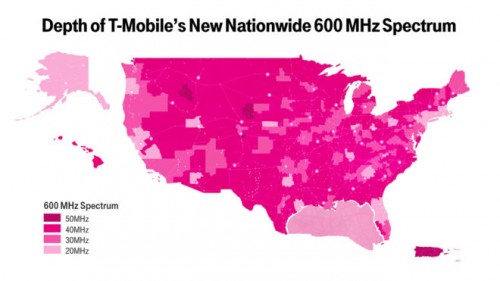 I’m not claiming that this is right around the corner: this year or next. 5G standards are still being defined and there’s a lot of work to do. But it will be here in the next two to three years… and T-mobile will be on the forefront of unlocking the 5G future for everyone.

This is not before Legere roasts Verizon and AT&T for jumping the gun with 5G (at around 0:50 in the vlog). He also reminds us that “5G spectrum” is just spectrum. And that T-Mobile is going to use all the spectrum for its 5G network.

if they accomplish real 5g speeds that is going to be crazy ! looking forward to the 5g upgrade.