Two new Sony Xperia leak, should be Nypon and Kumquat

The MWC is coming in a few weeks and Sony is definitely up for some announcements there. The Xperia S has already stolen the spotlight, but it is yet to see what's coming. 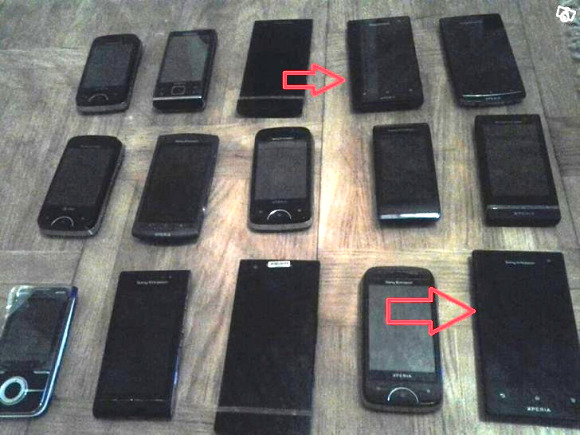 Today we get a glimpse of that. Two unknown Xperia smartphones popped up in a group photo. The bigger fella at the bottom should be the codenamed Xperia Nypon - a NovaThor U8500-based handset with a 4" qHD Reality display and 8MP camera with 1080p video recording. It looks much like the already announced Xperia S, but as you already noticed - the specs are different.

The smaller Xperia gadget at the top should be perhaps the one rumored as Kumquat - the Xperia mini successor. It is also supposed to be based on the NovaThor U8500 chipset, but should feature a smaller 3.5" FWVGA Reality display and a 5 megapixel snapper with 720p video recording. It could be also the previously leaked Xperia Pepper, but the device on the picture seems smaller than the Pepper.

The next-gen NovaThor-based Xperia are under way for sure. Sony is now preparing for the MWC in February, so we won’t have to wait too long before the official announcements.

Sony Ericsson is a joint venture! That means 50% belongs to Sony and the other 50% to Ericsson! so it's not just patents from Ericsson and some money! Look up what a joint venture is and you'll see you are wrong! PS: so you can also say from the ...

Kumquat? Nyphon? These names are terrible. they sound very suggestive ... TO ME ;-)

It's a Sony so it's great