The holiday season is coming and people are starting to think what they can replace their aging phone with. Analysts at UBS did a survey, which revealed interesting stats about retention rates - that is how many people plan to stick with the same maker for their new phone.

Unsurprisingly, Apple topped the charts here with 89% retention rate. That’s impressively high, but it’s a bit down from what it was a year and a half ago - Apple used to have a whopping 95% retention rate in 2010.

Retention rates are down all around, say UBS. HTC managed to sneak into second place with 39% after RIM fell to 33% (half of what it was 1.5 years ago). Samsung and Motorola come in fourth and fifth with 28% and 25% respectively, followed by Nokia with 22%. 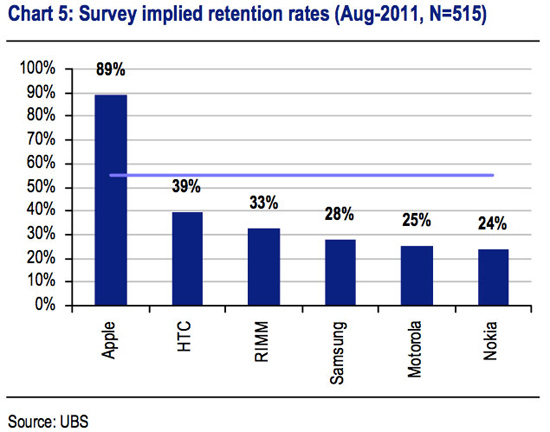 Android as a whole proves not as binding as iOS - 60% say they’ll get another Android, while 31% are pondering a move to Apple’s mobile OS.

Most of the people questioned in the survey were high-end smartphone owners and four fifths of them will be spending more on phones and related expenses, regardless of the state of the economy.

Hi,I'm from Guelph Ontario and I like the Iphone 4s

Bought a Macbook Pro this spring. Some Snow Leopard bugs were very serious for me (samba is crap) so I "upgraded" to Lion. Bad move; much more buggy, crashing all the time... For that price I expected stability, they have a known hardware b...

Well the problem with Apple is once you use their products you've sold your soul. You are tied to the system via I-tunes and anyhting else you have. LEave the platform you lose anything you've invested in - albums, music etc. And any accessory is use...