The Ulefone Armor 7 packs a 6.3" IPS LCD screen with extended 1080p resolution minus the waterdrop-shaped notch. While Ulefone doesn't share the glass manufacturer, it is rated very well for scratch and crack endurance. 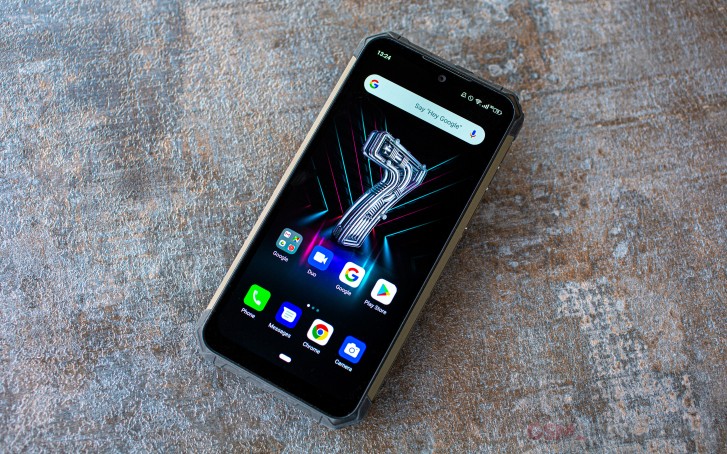 There are no special screen modes, and no sunlight brightness boost - meaning the display options are quite scarce indeed.

We measured deep black levels and a maximum brightness of 406 nits, making for a below-average brightness but an excellent contrast ratio of 1455:1.

At the far left of the brightness scrubber the screen has a minimum brightness of 16.2 nits - nothing impressive either.

As far as color presentation is concerned, the Armor 7 panel has a decent accuracy with average deltaE of 6.3. The main culprits behind the deltaE > 4 are the blue hues - a bit oversaturated, and then the whites and grays that experience a noticeable blue tint.

Quite expectedly, Armor 7 scored an outstanding result in our battery test with a 140-hour Endurance rating. With such an impressive result now the Armor 7 occupies the sixth place in our all-time battery chart. It did a fabulous job across all test scenarios - video playback, calls, web browsing and even stand-by performance. 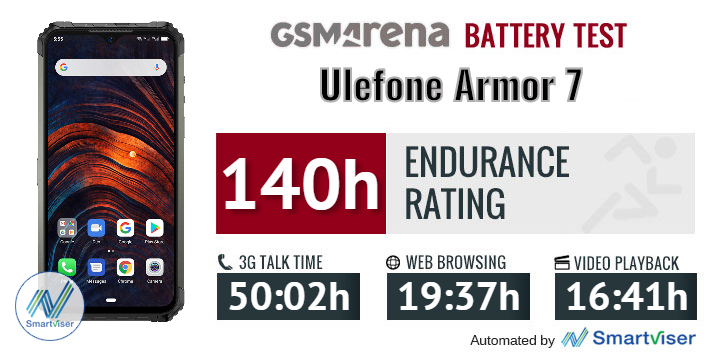 Our battery tests were automated thanks to SmartViser, using its viSerDevice app. The endurance rating above denotes how long a single battery charge will last you if you use the Ulefone Armor 7 for an hour each of telephony, web browsing, and video playback daily. We've established this usage pattern so that our battery results are comparable across devices in the most common day-to-day tasks. The battery testing procedure is described in detail in case you're interested in the nitty-gritty. You can check out our complete battery test table, where you can see how all of the smartphones we've tested will compare under your own typical use.

Despite its humongous body, the Ulefone Armor 7 doesn’t have a 3.5mm audio jack, but the company does include a USB-C-to-3.5mm dongle in the retail package. We performed the test using that and odds are the findings will be relevant as every adapter will get it.

The Armor 7 was deafeningly loud when hooked to an active external amplifier, but its clarity left something to be desired with some distortion and less than ideal stereo separation. It’s doing notably worse than most other phones we have tested, but we’ve come so far that the majority of people wouldn’t be able to tell the difference.

The volume dropped a bit with headphones but remained way above average as it started so high. Stereo crosstalk took another hit, while frequency response got slightly shaky, rounding up a mediocre performance in terms of clarity. Once again though, it’s extremely unlikely that you’ll own a pair of headphones where that will make a difference, let alone bring those to environments where the Ulefone Armor 7 is supposed to be used.