The Ulefone Armor 9 is one durable, thick, and heavy smartphone, yet beautiful in its own way. Ruggedly handsome, if you will. And for those of you keen on such armored specimens, you will find the Ulefone looks and build quite appropriate by having the right parts and accents at the right spots. 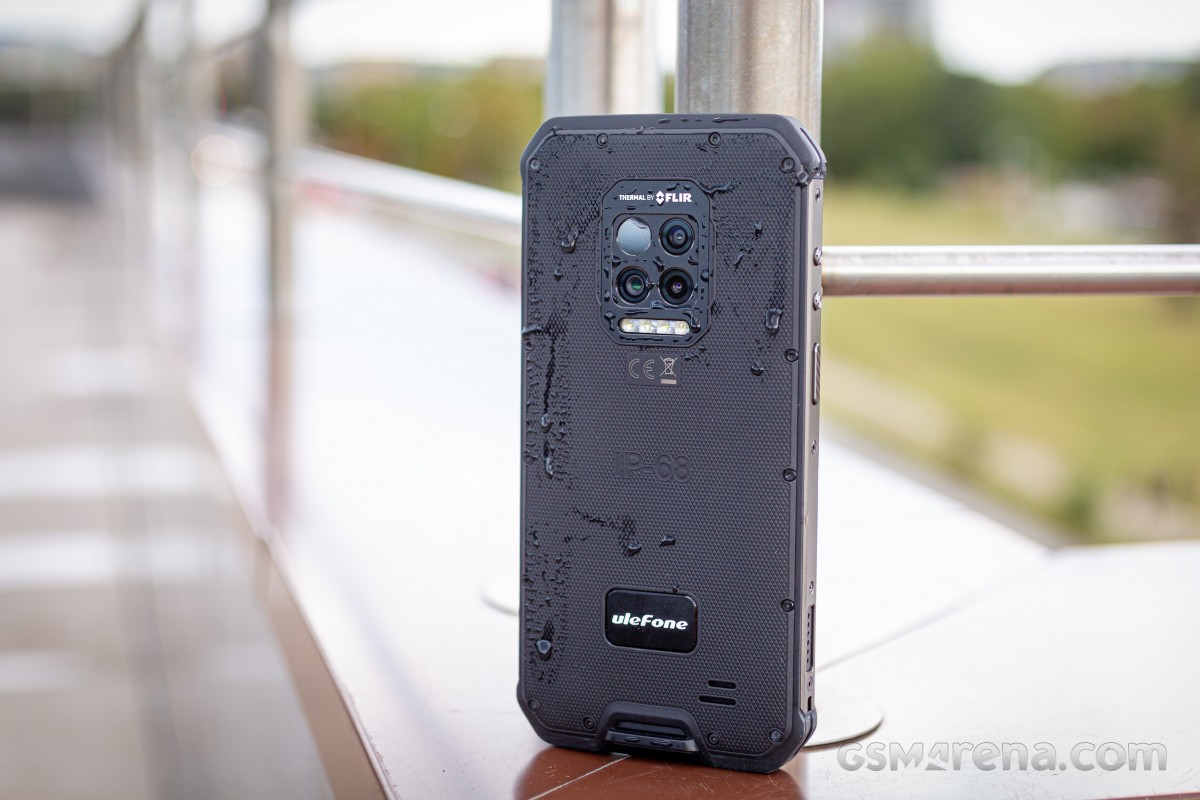 The Armor 9's exterior is rich in materials - you can see and feel metal, rubber, different types of plastics, and glass, of course. It was designed to endure all sorts of torture and accidents, and you would believe Ulefone's claims the moment you lay eyes on the Armor 9. It is indeed wearing one heavy armor.

Ulefone specifies all sorts of endurances - for starters, the Armor 9 is IP68-rated for dust and water protection, and you can see the IP68 markings on its back. But just like with previous Armor phones, the Armor 9 offers even better endurance with an impressive IP69K rating. The higher water rating means resistance against pressurized water instead of deeper submersion. That's probably why the USB-C port and the 3.5mm jack needed to be sealed with super tight rubber caps. 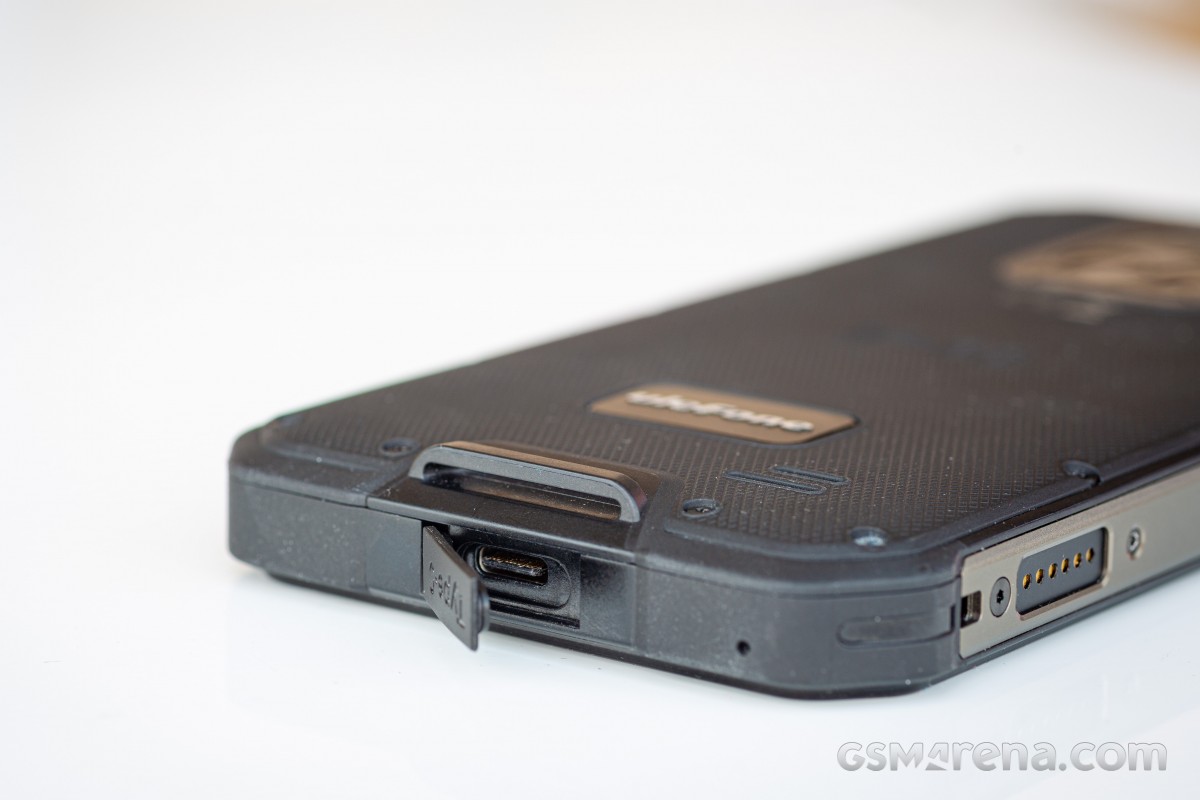 The phone is also drop (to concrete) resistant from up to 1.2 meters. It should easily survive such a drop thanks to the enhanced corners and rear panel, as well as the additional plastic frame that engulfs the screen's glass. 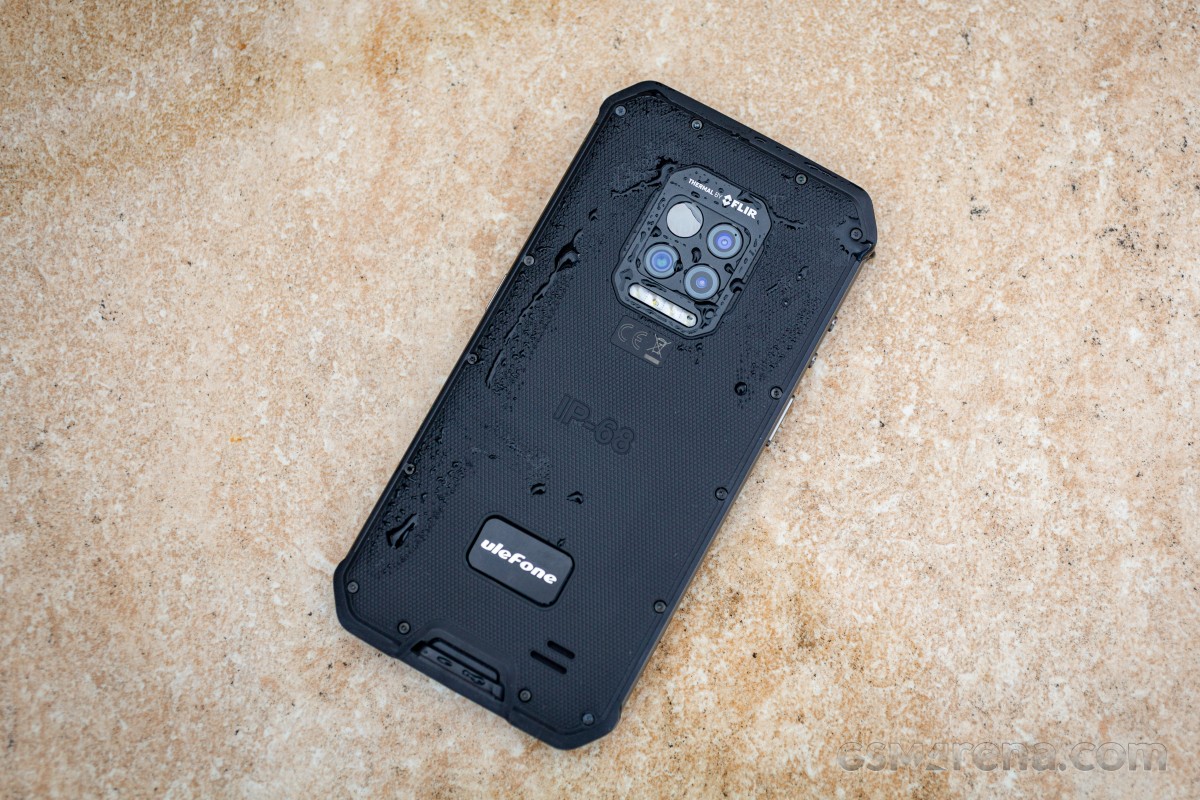 Now, let's take a more thorough look at the Armor 9, shall we? 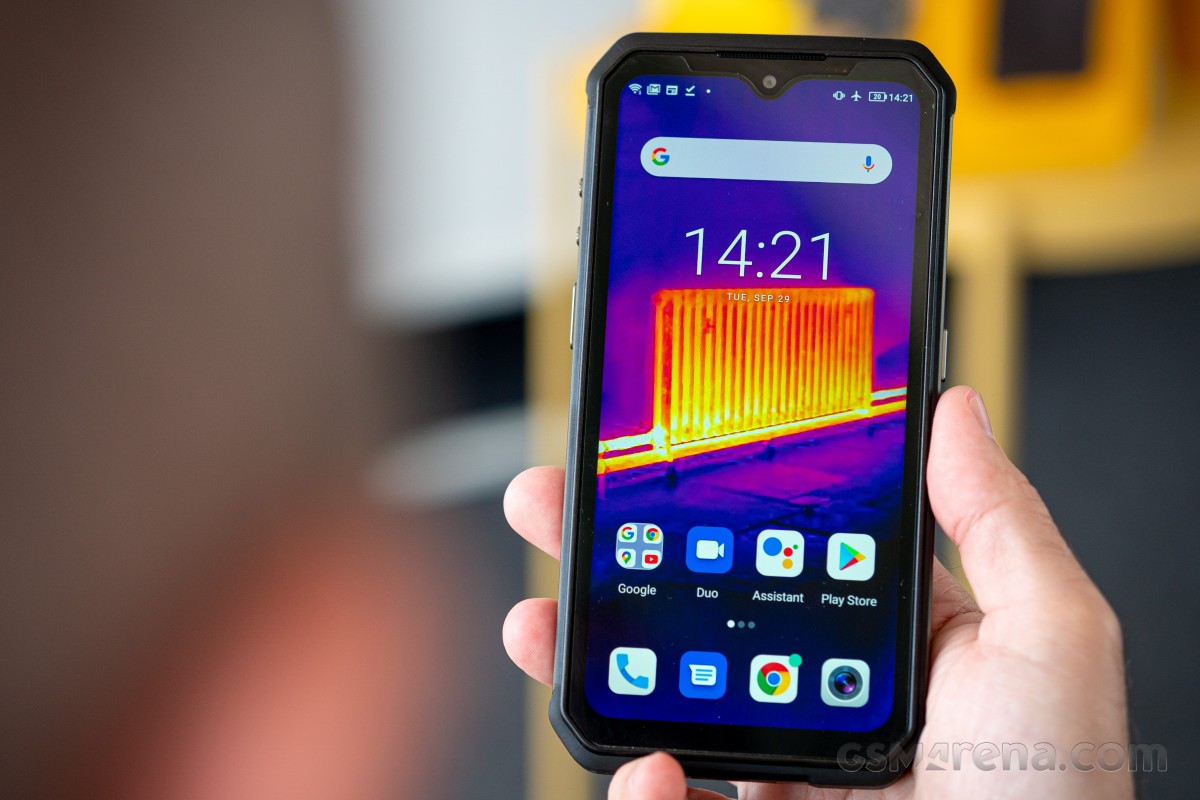 The front of the Ulefone Armor 9 is all about its display. There is a 6.3" IPS LCD screen of extended 1080p resolution and a droplet-shaped notch. There are a bunch of sensors and a tri-color (RGB) LED notification light above the screen notch and then - the earpiece grille.

The screen bezels are so large that it makes us wonder why on Earth Ulefone didn't put the front camera on them? There is probably space for a dozen selfie snappers on the bezels, and yet the maker decided to put the tiny 8MP front cam on display itself. It is what it is, though. There is a scratch-resistant glass keeping the screen safe, but it's not the only guardian you'll see. There is also an elevated plastic frame around the screen, as thin as it might be, which prevents the screen from ever touching the ground should the Armor 9 falls on its face. Ulefone is also shipping the phone with a bundled shatter-proof glass protector rated at 9H of hardness on the Mohs Scale, which is the first thing you should apply once you unbox the phone. 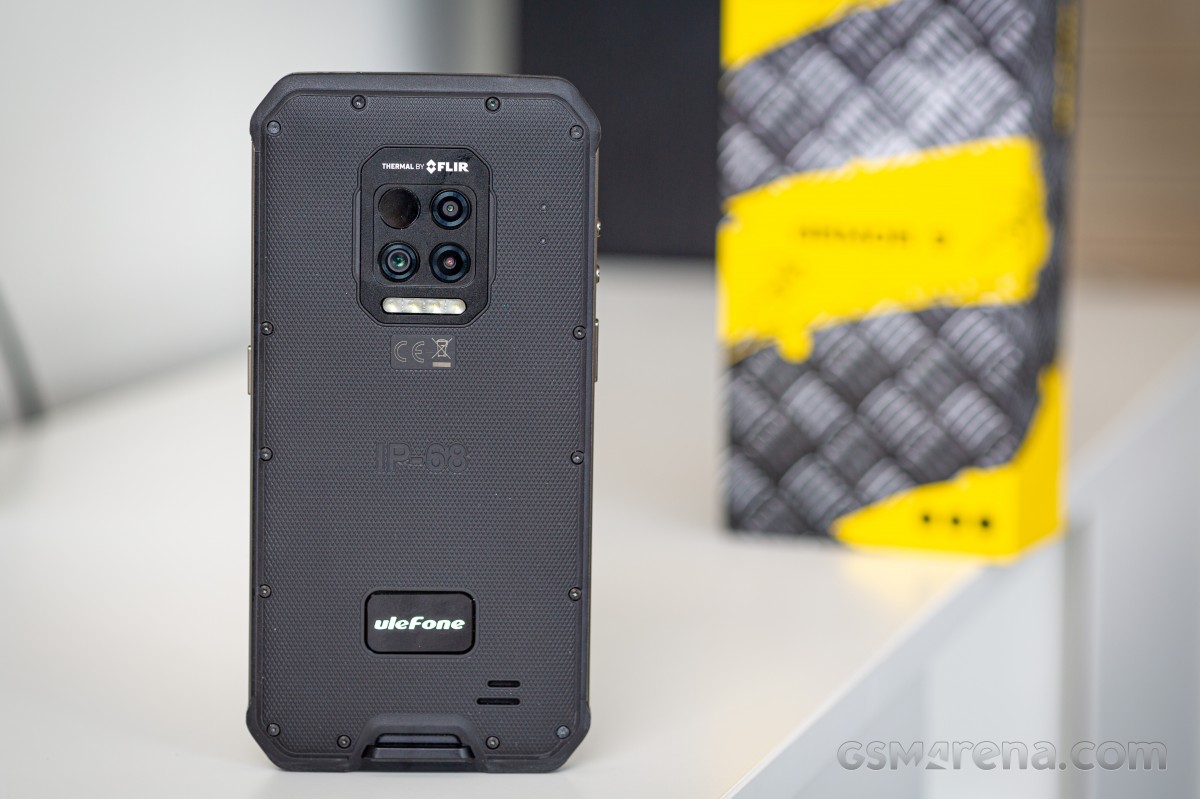 The back of the Armor 9 is really cool. It is made of thick and soft TPU plastic that has this rubber-like feel. It has a tiny diamond-shaped texture that makes for a very secure grip. Ulefone says the entire back panel is enhanced with aluminum alloy during the manufacturing process, and the whole thing absorbs shock in an unprecedented way.

There are a number of tiny screws on the back, a huge Ulefone logo on a separate metal plate, and you can see the giant lanyard eyehole around the bottom. 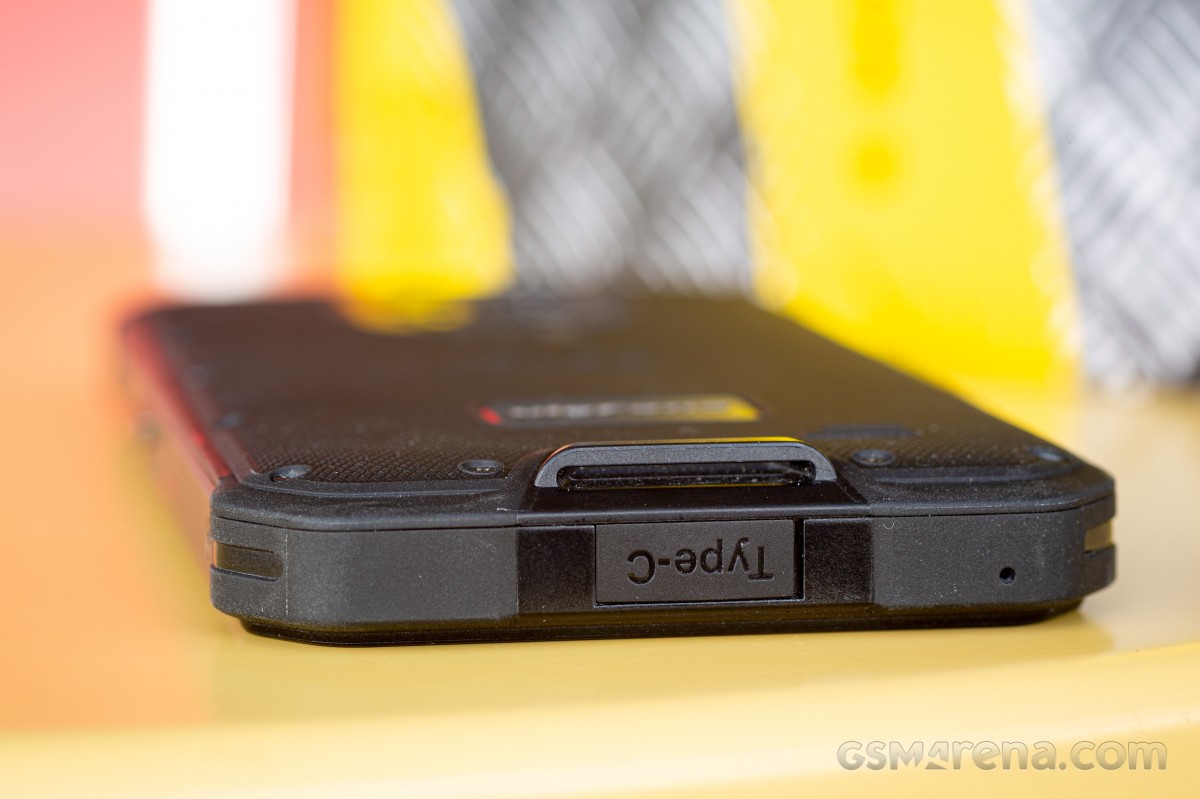 The 64MP primary, the 2MP depth, and the FLIR camera, as well as the quad-LED flash, share a common plastic plate on the back of the Armor 9. All snappers are slightly concave, and they won't have contact with the surface when the phone is lying on its back. 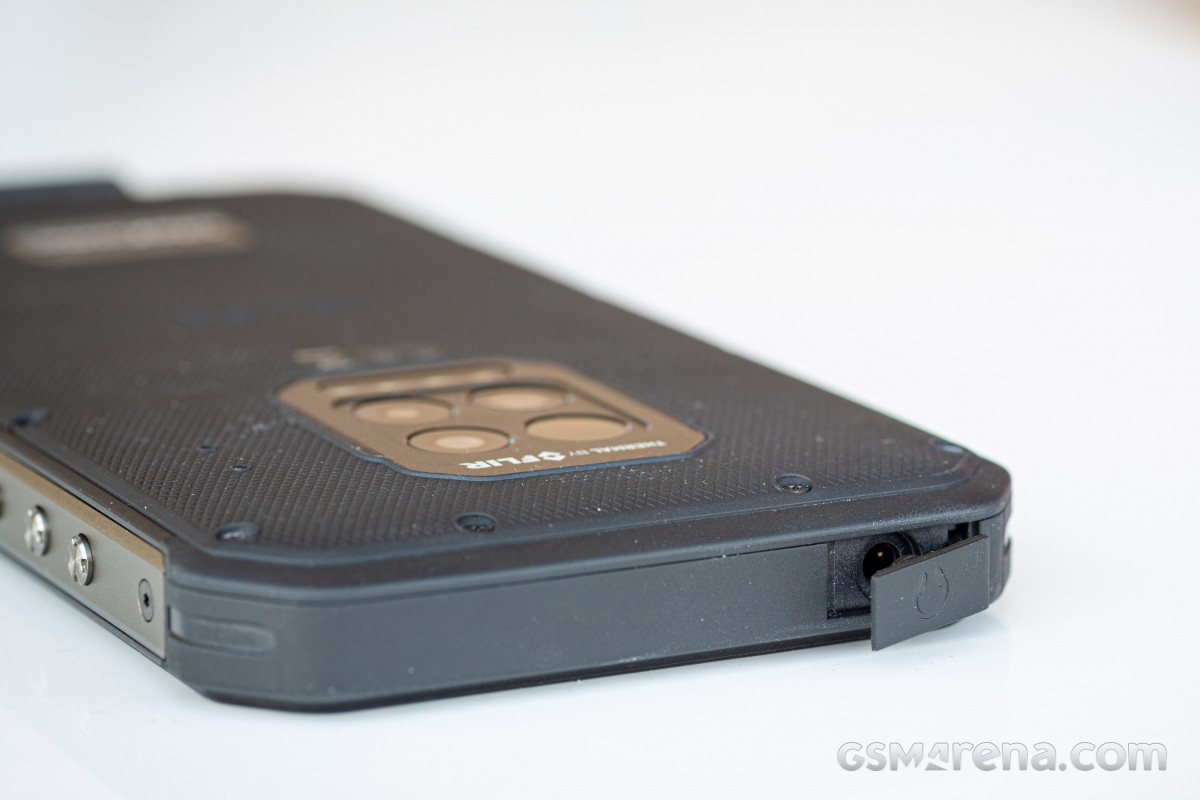 Also on the back of the Armor 9 there is a giant speaker. It sounds promisingly loud, but we'll get to it in a bit.

The Ulefone Armor 9 has a unique frame with a ton of features all around. The four corners are the first thing that stands out - they are enlarged and enhanced with rubber, aluminum, and plastic. These seem to be four large buffers for shock absorption.

The top and bottom sides are made of the same TPU plastic as the corners, and each has one rubber cap protecting the 3.5mm jack (top) and the USB-C port (bottom).

There is a long going on around the metal pieces. On the right, you'll see the fingerprint scanner, the power key, and a long metal cap hiding the SIM and microSD tray. We are not fans of the side-mounted fingerprint reader, as it gets triggered a lot, and most of the time we had to type our PIN because of the too many (unintentional) attempts. We get why it is on the side, but its position always gets in the way. This isn't an issue with the Armor 9 alone, though, it's pretty much valid for any side-mounted fingerprint sensor. 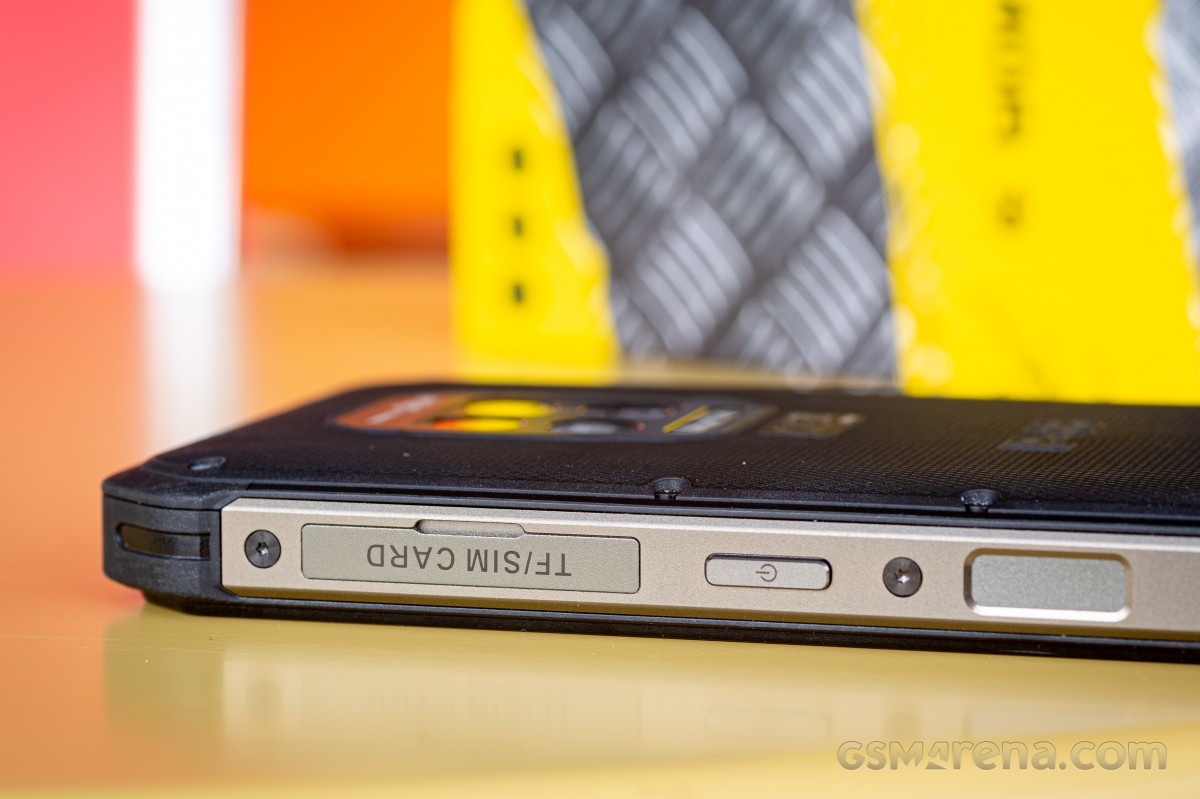 The left side of the Armor 9 has two round volume keys, a dedicated PTT key, and the endoscope mount. The latter has six pins, a hook, and a removable screw. When connecting the endoscope, you need to remove the tiny screw, then hook the endoscope module on its place and screw it back in using its own screw. 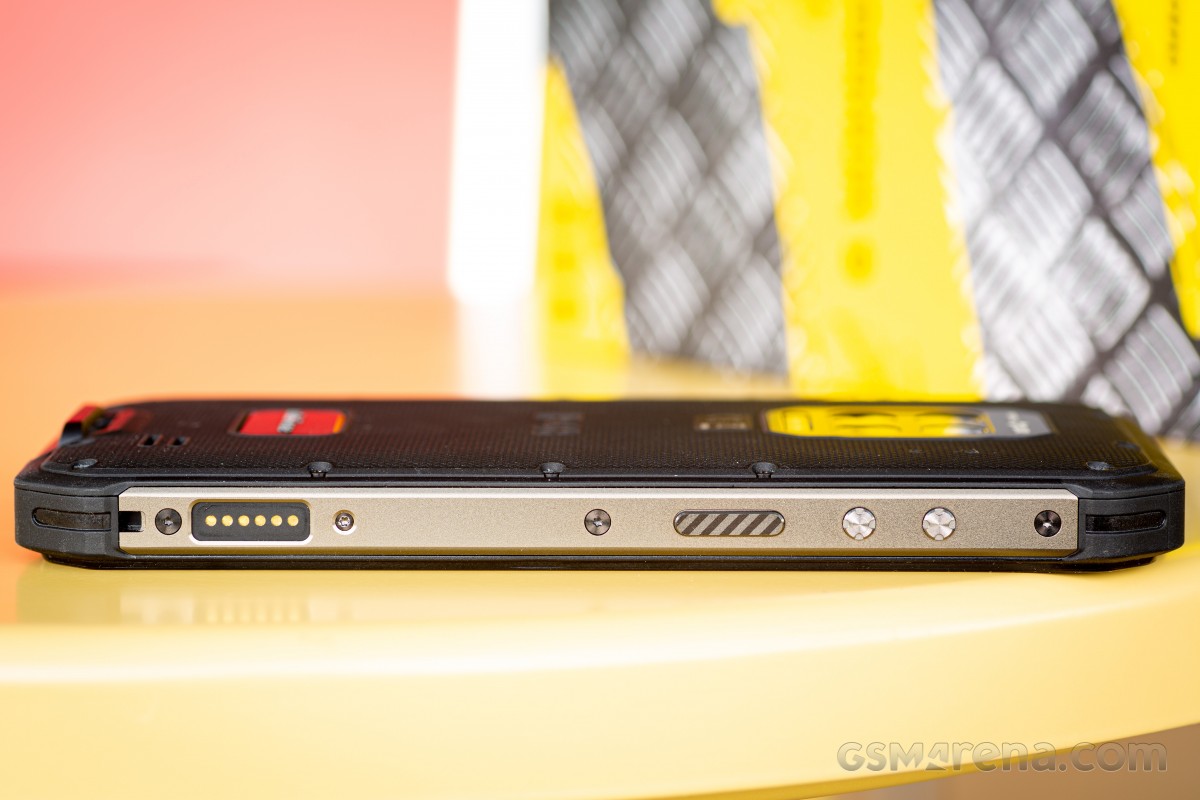 The Ulefone Armor 9 is one of the heaviest and bulkiest smartphones we've handled lately, and that's fine. Everything that adds extra weight on this phone is there for a good reason, and it fully lives up to its Armor name. And even with all the rugged parts, Ulefone has managed to make it look nice, even pretty in its own rugged way. 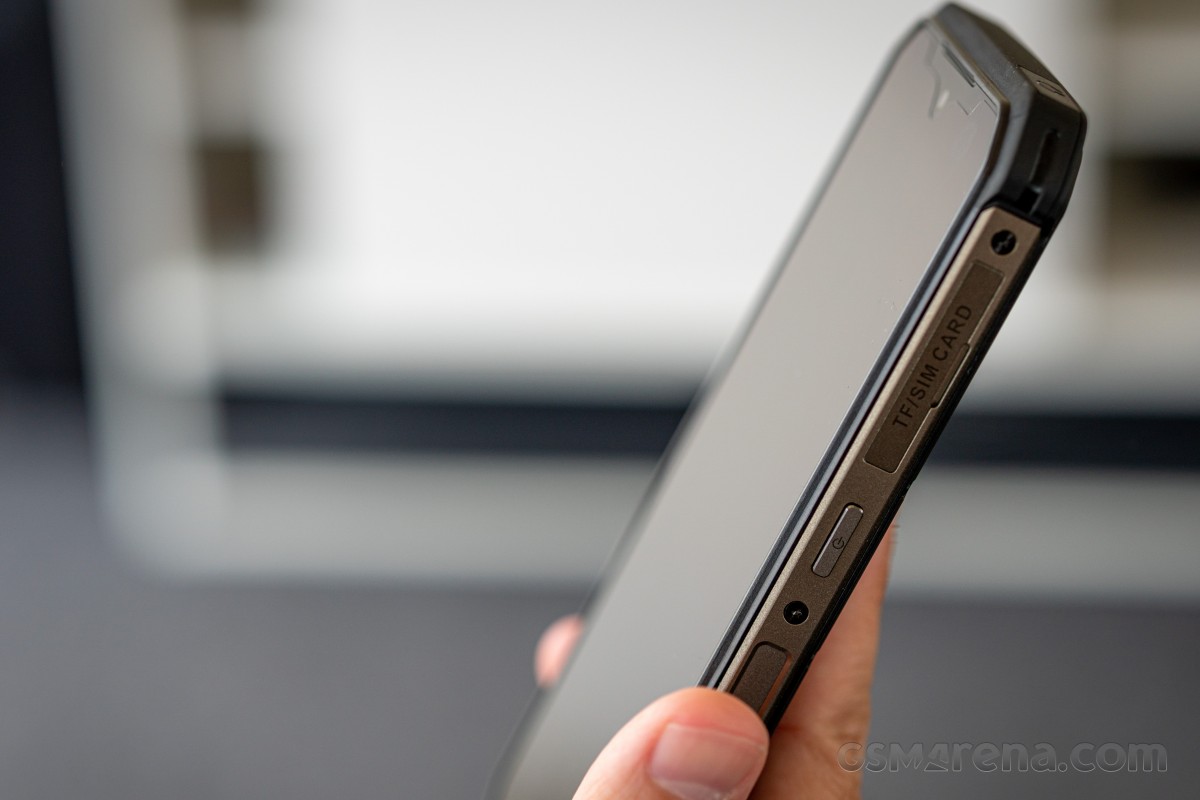 Handling the Armor 9 is indeed a very secure and satisfying experience, no matter if your hands are sweaty, wet, oily, cold. It always sticks nicely to your hand, and you will never feel like dropping it, no matter what you are doing.

The Armor 9 is not a pocket-friendly phone, yes, and yet - it won't be much of a burden in most (sturdy) pockets.

The Armor 9 Protective Case ($30) is reasonably cheap and worth having around. This humungous case has a massive rubber frame that envelops the phone and will absorb even more shock than the regular Armor 9 shell. 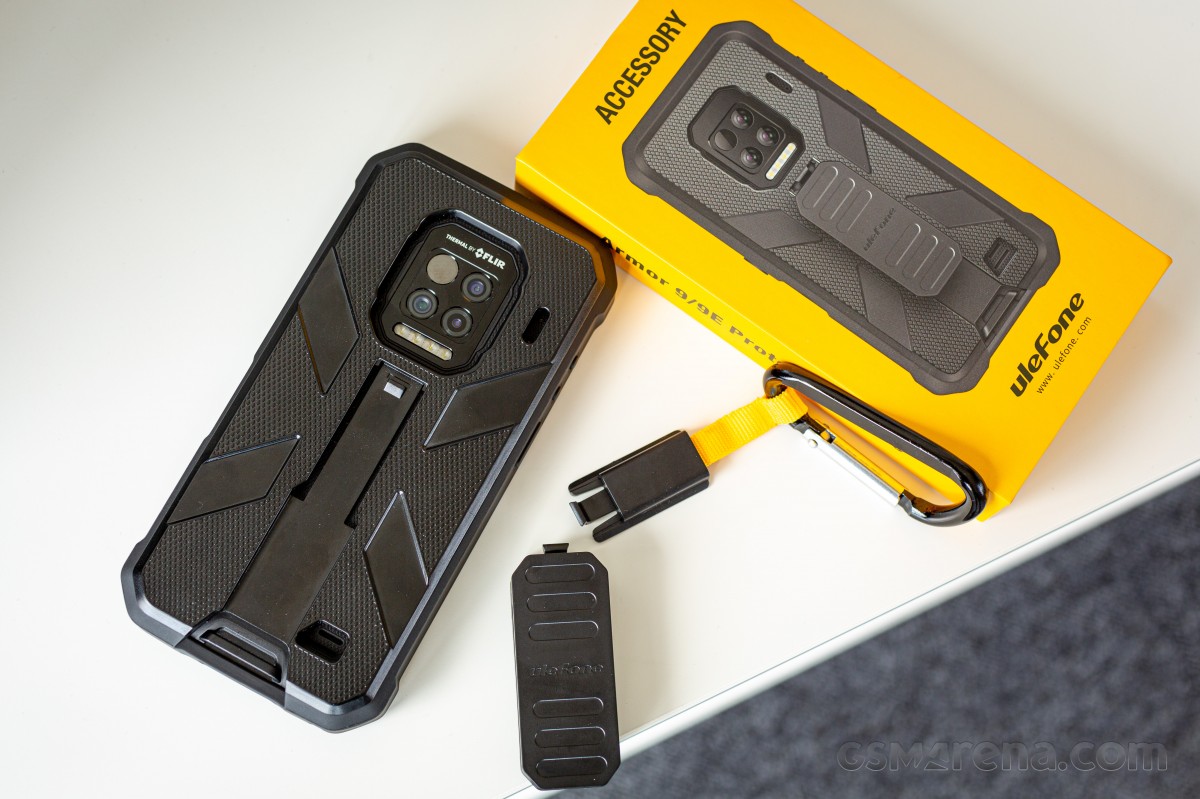 The back of the case is made of super thick TPU plastic, and it may as well make the Armor 9 bullet-proof. There is a dedicated mount for the belt clip or the carabiner - both are part of the Armor 9 Protective Case bundle. 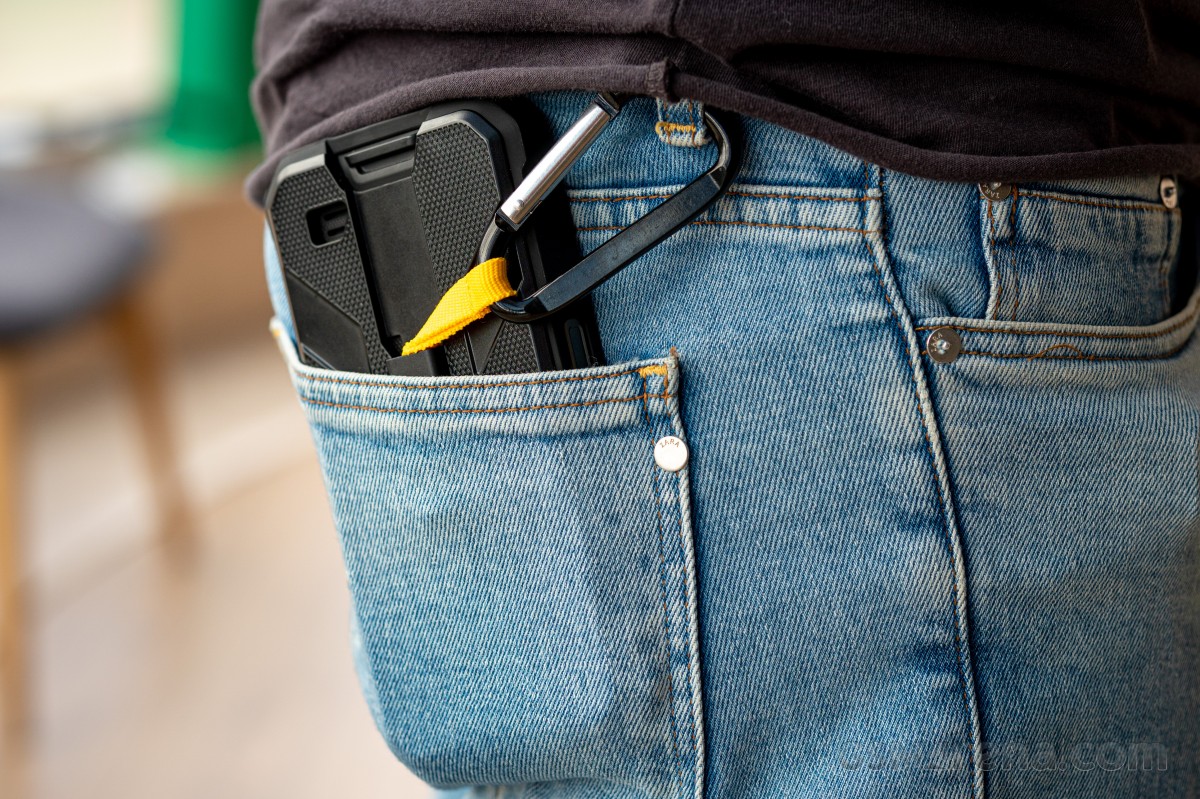 The Armor 9 was meant to be in harsh environments and be an invaluable work tool. This means it has to be on your belt instead of the coziness of your pocket. And if that's indeed the case with your routine - this case is simply a must. 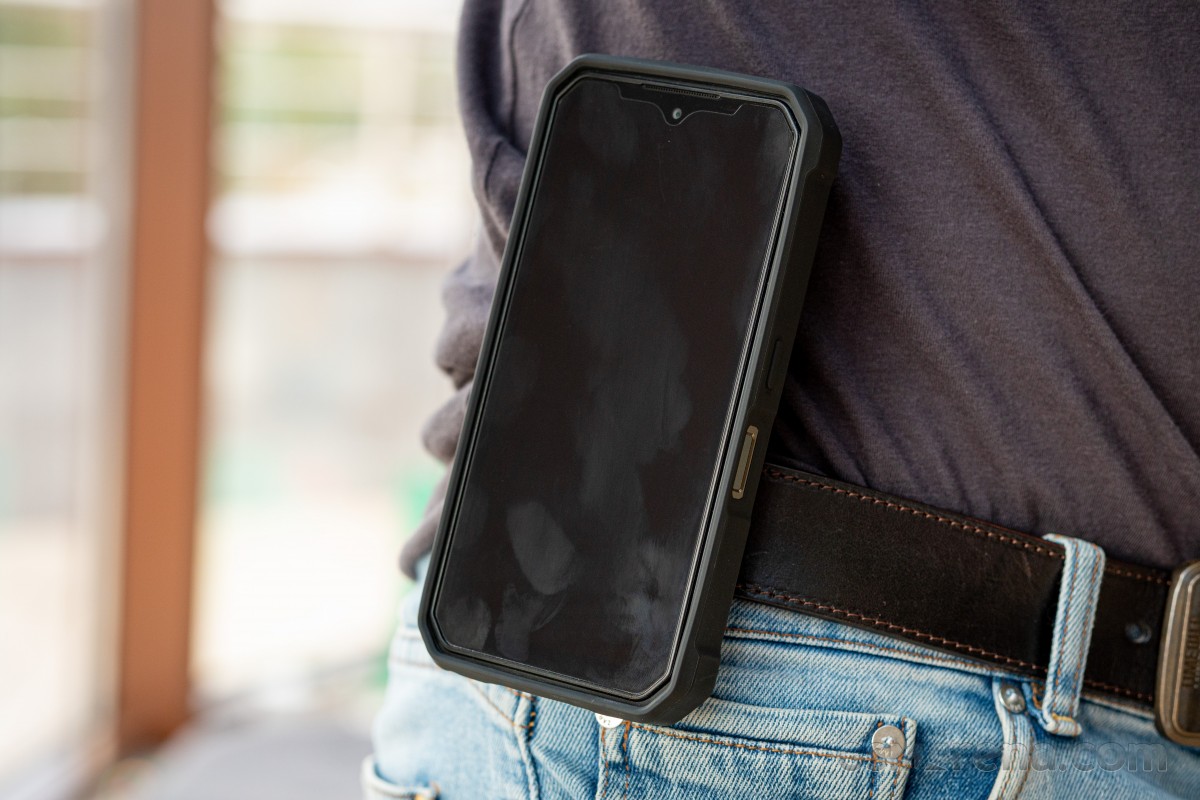 You may want to consider the Endoscope E1 accessory ($50). It has a 2-meters long cable that ends with an HD camera and six LEDs with adjustable brightness right via a mounted wheel around the end of the cable. 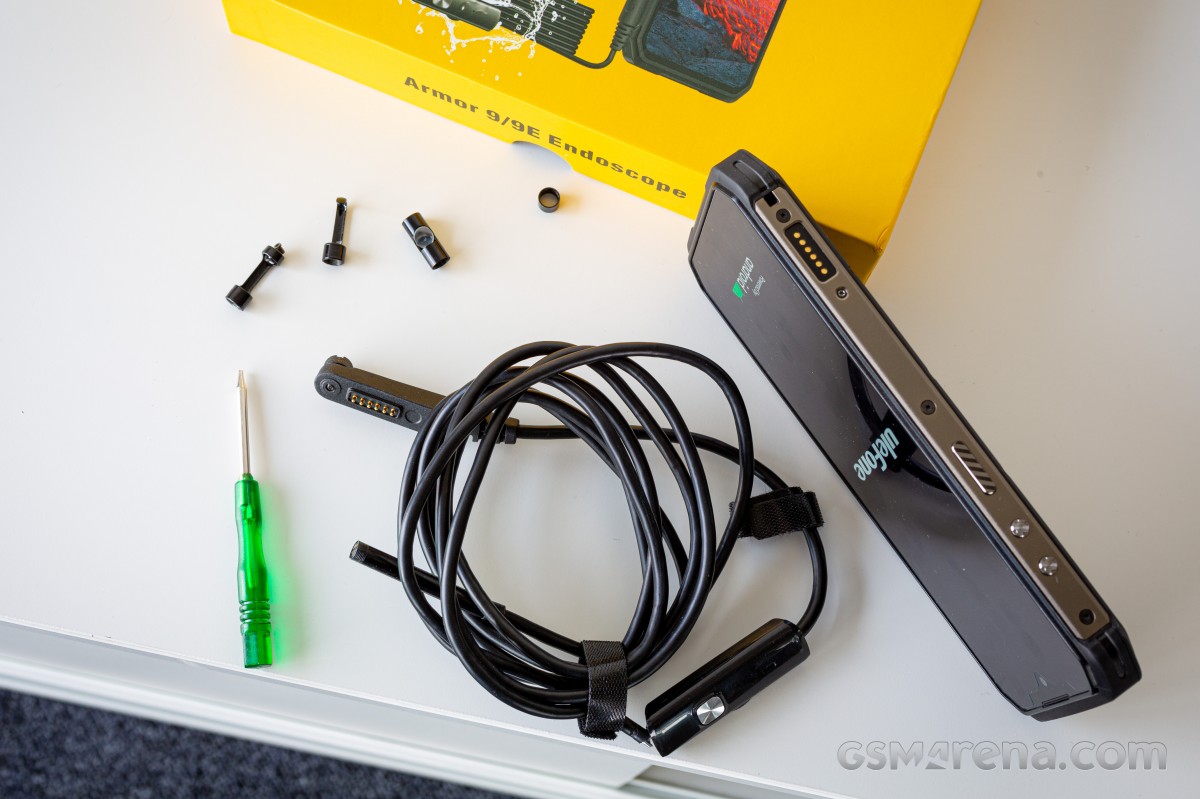 Thanks to the special lock, the accessory is IP67-rated for dust and water resistance. Attaching it to the Armor 9 requires you to unscrew one small screw with the bundled screwdriver and then hook the end of the endoscope to the side of the Armor 9, connect the pins, and then fasten the whole thing with the integrated screw. 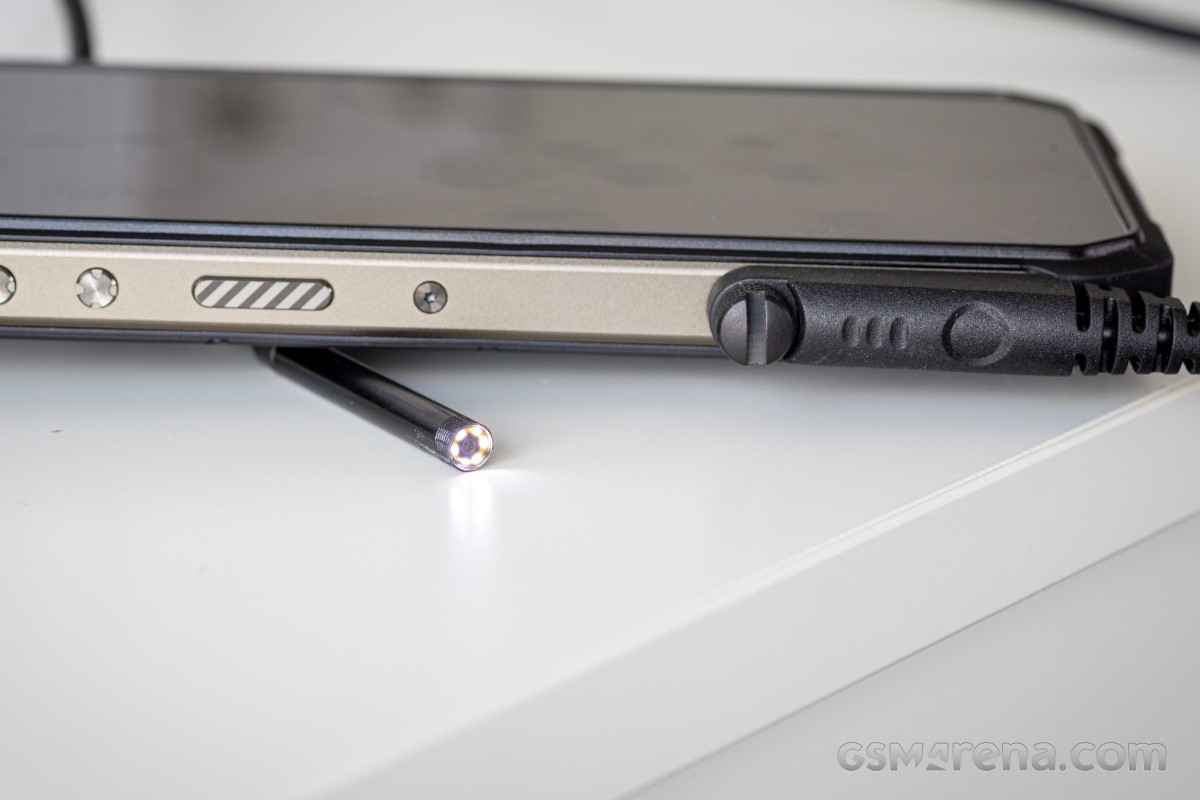 This endoscope also comes with an additional hook, one small reflecting mirror, and a magnet - depending on where and what you need to do with it. 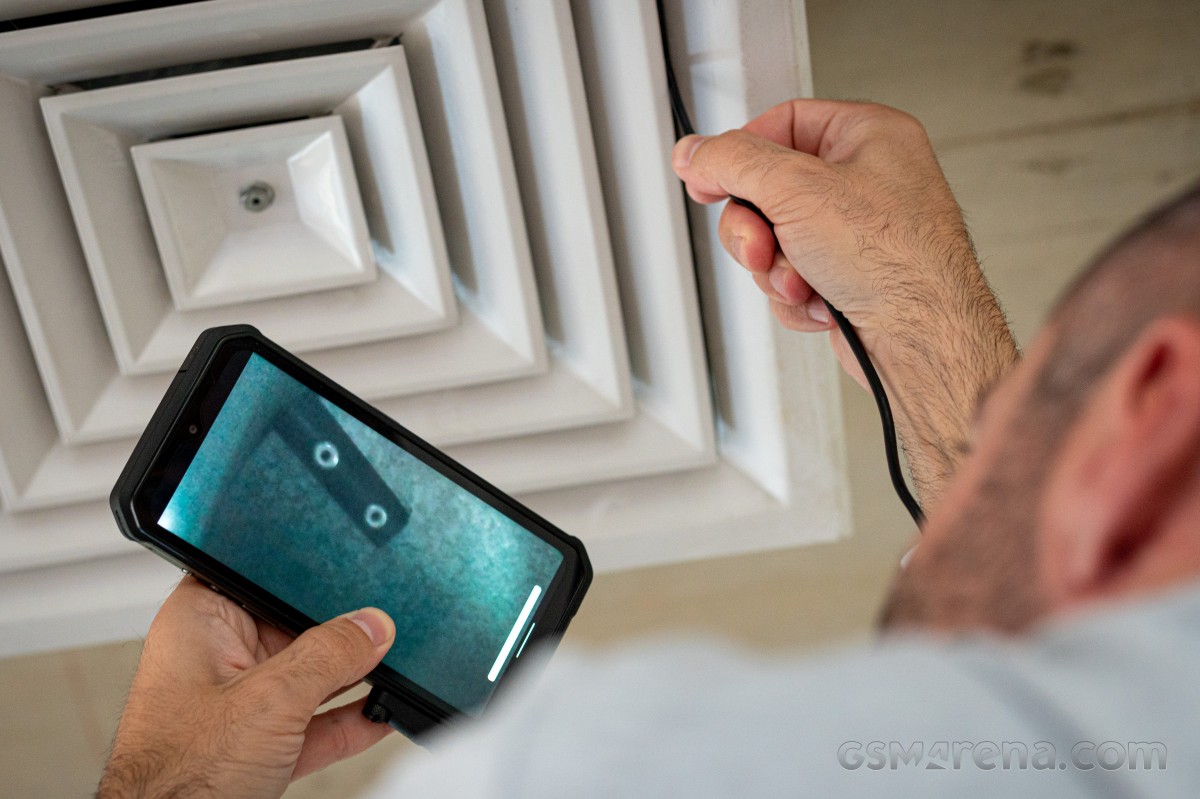 The endoscope accessories have been around forever, but this OEM one promises more reliable connection and water resistance - things the $10 ones from AliExpress can't match. 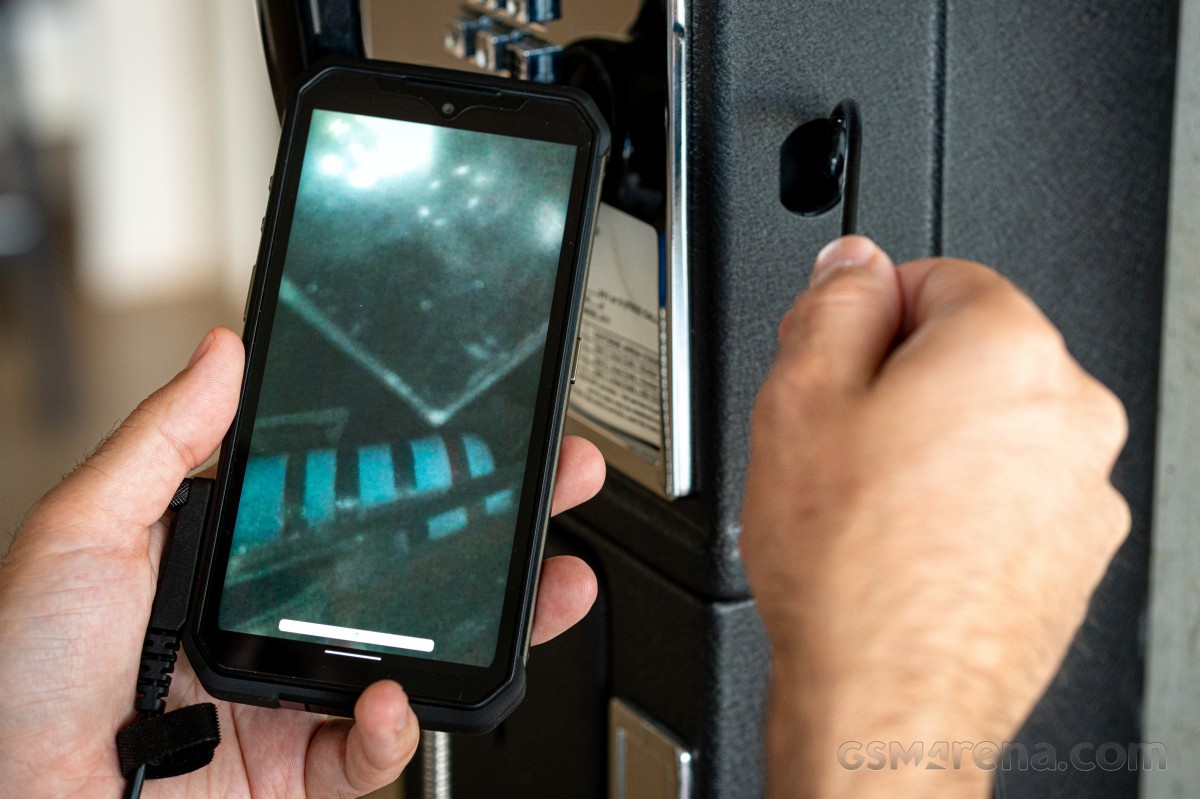 It is not that easy to navigate the endoscope in vents, shafts, service boxes, and whatnot, but with some practice, you should be able to get the job done. It obviously isn't a professional-grade endoscope, but it is a nice thing to have for when it matters. And as it turns out - even if this is not our line of work - we still found ourselves needing such device on a couple of occasions.