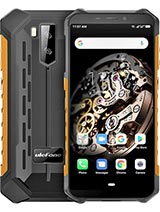 In just 3 weeks the charging port seal just came off and then 2 months later the earphones port seal came off. The phone itself seems strong but these pieces are not properly thought out. One's gonna open these seals many times for charging the device so it would make sense if they made them durable. A 2 star from me.

Screen cracked after just a small drop (2ft). I was very surprised. Caught the edge of the glass just right I guess. Small chip out of the edge and a fine crack about 1" long. Thankfully not in the main viewing area. I've since researched that they do not use Gorilla Glass screens.

Karma, 04 Nov 2020Great phone. Extremely rugged. I literally have washed off the phone (with soap and water) to ... moreTrue

Anonymous, 15 Mar 2021My rear Camera and flash light stopped working toSame here. Mine was recovered by warranty tho.

Anonymous, 01 Feb 2021Ulefone Armor X5 has no NFC, sorryIndeed it does have NFC, check yourself before You wreck yourself

Anonymous, 15 Mar 2021My rear Camera and flash light stopped working tothe mine to after 2 day and for the garantie a big zero.

Tim, 02 Jan 2021Does Armor X5 go with NFC? China seller on Ailexpress said that it has NFC but on gsmarena no ... moreUlefone Armor X5 has no NFC, sorry

Anonymous, 13 Dec 2020I can't delete people I have in my contacts, says it is not possible to delete contacts.Use google contacts app from play store the build in app is just very basic, the phone is made for customization.

The camera autofocus is not helpful when taking pictures of documents. It just never focus properly and no clear photos can be taken as you cannot self focus to get the writing clear. Otherwise the camera is great for anything else

Karma, 04 Nov 2020Great phone. Extremely rugged. I literally have washed off the phone (with soap and water) to ... moreDoes Armor X5 go with NFC? China seller on Ailexpress said that it has NFC but on gsmarena no NFC. Thank you.

I can't delete people I have in my contacts, says it is not possible to delete contacts.

Great phone. Extremely rugged. I literally have washed off the phone (with soap and water) to remove dirt and mud. It rained on it and have left it under the sun without problems. I have dropped it on concrete a couple of times and still works great. Like the idea of the case being a bumper case and came with a screen protector already.

With that said, I use it as a work phone, not a "kids" phone:
*camera is great for documenting jobs.
*GPS, accelerometer, compass works like a charm.
*touchscreen works even with gloves.
*battery last good 2-3 days between full charges (it does takes forever to charge it, though)
*Android 10 Q and not many bloatware (had to remove some with ADB).
*Wanted to root it but Android 10 won't budge. Have not find a suitable TWRP file for this phone.

As I mentioned, this is a great phone for work, not for social media or the like.

The front camera suddenly stopped working. Can you kindly provide an upgrade to fix this problem??
Also, when it freezes,I have to restart to unfreeze it. Thanks

The back camera is unable to switch back.I can only use the front camera. I've resetted my phone,force stop the camera but still nothing. Any help from the manufacturer?

The back camera is unable to switch back.. it only takes selfie (front camera only). I have reseted the camera, cleared the cache at the camera settings and even formatted the phone. Yet still problem persists..
Any help from the manufacturer.

And what Galileo and Beidou navigation ?

troubled, 25 Jun 2020the padlock on the lock screen of my armor x5 is showing locked, preventing me from unlocking ... morethe screen pad is locked. am unable to unlock. this phone has serious problem of locking the screen pad. what can I do to unlock the screen pad?