Unannounced Samsung S5550 turns up, has an AMOLED screen

After spending some time in our rumor mill the Samsung S5550 now made it to the front page since it can already be found in the stores. Strangely, the phone hasn’t been officially announced yet but it’s not the first time Samsung release a phone to the market without proper introduction.

The market entry of Samsung S5550 is like that of Samsung B3410: we saw it at the Spanish Phone House before it was announced. 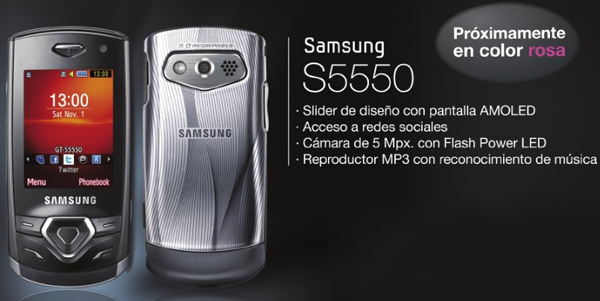 The Samsung S5550 specs listed in the Phone House catalogue are not full but they are actually enough to give the idea of what we can expect from the device. So, the S5550 is a slider packing an AMOLED display and a 5-megapixel snapper with Power LED flash.

As you might have guessed, it will also come with a music player. But the most interesting part seems to be the support for social networking services.

The back of the Samsung S5550 looks impressively all-metal. And it seems the Phone House will soon have it in pink as well.

Unfortunately, there's no price mentioned in the Phone House catalog.

its like phone of optimus prime for me does it transform??

what a lazy designed fone they just picked up a earlyer slide model and gave it a renovetion. it doesnt even look nice it hurts my eyes only writing this.