Amid all the Galaxy S20 hype, as we inch closer to the February 11 Unpacked launch event, it is kind of easy to forget about the Galaxy Buds+. Thanks to an earlier specs sheet leak, we pretty much have the whole scoop on this new 2020 model, which promises substantial battery life upgrades and better microphones, for only about $20 more, retail ($150).

Frankly, that's plenty of preliminary information already. Yet, one reputable industry leakster also managed to get his hands on an actual pair of the Buds+. The end result is a brief unboxing video, complete with initial impressions and a quick feature rundown. You can see the clip for yourself.

There are also a few nice quality photos of the buds from different angles, courtesy of the same source. Apparently, some European retailer actually sold him the Galaxy Buds+ early. Or at least this one unit. As far-fetched as that sounds, that has happened for various products in the past. With some unannounced gadget even appearing on actual brick and mortar store shelves early. Still, you can decide for yourself whether to regard this as a sneaky Samsung official teaser or not. 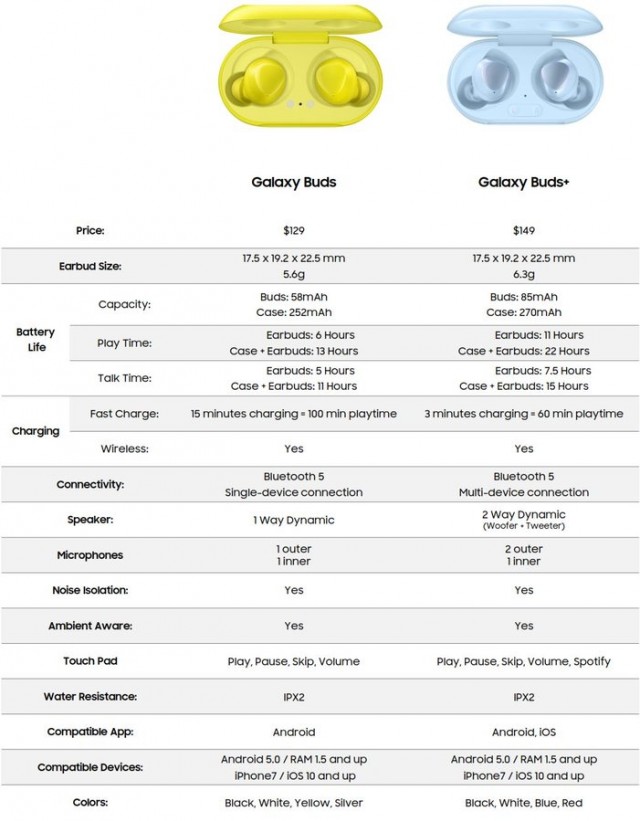 Regardless, we do appreciate the closer look. And from what we can gather, the Buds+ offer little in the way of surprise. Just like the leaked specs sheet suggested - an all-round upgrade, with pretty much the same styling and features as before. The extra battery does come at a slight weight and size penalty, but we knew that already. Plus, the small in-bud cells are actually getting a fair bit of extra juice, for what is advertised as almost double the music playback time of the vanilla Galaxy Buds.

On top of that, each bud now has has a woofer and a tweeter in a two-way driver arrangement. Plus, a triple microphone setup for improved noise cancellation. Unfortunately, the latter only refers to in-call noise. The Buds+ don't have an active noise cancelling setup. They can, however, use said microphones for ambient sound passthrough and amplification. Multi device connectivity is also a thing now. And so is, apparently, a new Spotify gesture integration. Which, unfortunately, the hands-on did not go into.

Again, we'll take a teaser hands-on instead of nothing any day of the week. As a quick reminder, apparently Samsung is planning to bundle Galaxy S20+ and S20 Ultra pre-orders with a pair of Galaxy Buds+ for free. There have even been rumors of European vanilla S20 pre-orders getting the same deal as well. Not too shabby, especially considering that apparently $150 in the US translates to a much steeper MSPR of EUR 170 on the Old Continent. If we managed to peak your interest, you can check out our review on the 2019 Galaxy Buds for some context on what this year's upgrade might actually feel and sound like.

I just hope regular buds will see price drop now, since I don't want to pay over 100 Euros for them.

its okey brother. voice isolation is pretty good in V1 so this must be okey....

I'm totally disappointed because it do no have ANC.