Samsung is working on a 2016 iteration of the Galaxy On7, this much is pretty clear since we've seen the new phone being benchmarked not long ago, and parts for it have recently been imported into India for testing.

It would make little sense for the Korean company to launch a successor to the original On7 from last year and not do the same for the On5. And as it turns out we may have already caught the On5 (2016) being imported into India for testing a few days ago. 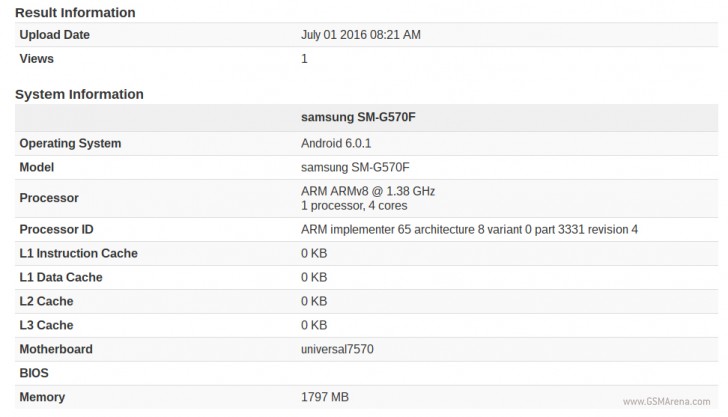 Now the same handset that we assume is this year's On5 (the SM-G570, that is) has been spotted in the Geekbench results database. This tells us that it will come with the rather mysterious Exynos 7570 chipset, sporting a 1.4 GHz quad-core CPU. The new On5 will have 2GB of RAM and it will run Android 6.0.1 Marshmallow.

The original On5 has the model number SM-G550 and only 1.5GB of memory, so the increase there will certainly be welcome, while the new SoC is 64-bit as opposed to the part found in last year's model which wasn't. Other details aren't available just yet, but more leaks should be on the way.

where is the marshmallow update for on5... rom is available but still not OTA any1 updated with ota than let us knw

Samsung have that one. Its called Galaxy A3(2016). You want something with removable battery, Galaxy Alpha. Something cheaper, Galaxy J2 or S3. The specs are somewhere close to your wishlist.